On the 23rd July The Tainted Archive will be one year old and looking back at the older posts is interesting reading - fittingly the first ever post on the Archive was a Wild West Genre Overview. Reading it now made me wince a few times but the enthusiasm is the main thing and it's sure enough got that. It's got that in spades.

Interviews have been a big part of The Archive during the previous year and we've covered some big names and not only in the western genre. From the crime fields we've had Charles Ardai, Megan Abbot, Mark Billingham and Max Allan Collins. From the western genre we've had just about everyone including high profile chats with Beau Lamour on his fathers legacy.

Expect many more interviews over the next year.

One of the greatest successes has been the Wild West Monday campaign - it's the fourth one Nov 2nd. The genre is starting to thrive again and Wild West Monday is a big part of that. Don't forget to sign our petition via the right hand side bar.

We've published a full length novel, previously published as a Black Horse Western, with Chap Okeefe's The Sheriff and the Widow which is archived and can be visited via the link in the right hand sidebar. If you've not read it then give it a whirl - its a free full length all action western.

The Archive has also played a big part in publicising a novel, The Tarnished Star by a certain Jack Martin and took it to number one in the Amazon pre-order charts over four months before actual publication. The Archive will be once again this coming year pushing my book - only this time my new novel Arkansas Smith which is due out in March 2010. I apologise for the self promotion but of course I'm going to push my own books - I'm a writer and that's what I do.


Perhaps the single greatest thing the Archive has done is make me so many good friends in the blogosphere - the community between bloggers is something very special indeed. We learn from each other and allow each other little peeks into our own personal worlds. I've got too many bloggy mates to list but you are one and all, super-fabby-gear-fantastic.

Currently the Archive is getting on average 200 hits a day, though there have been some day when it's gone has high as 400. And we are fast approaching the golden 50,000 page loads. Followers of the blog are many - you can follow the Archive by clicking the follow me button in the right hand sidebar. 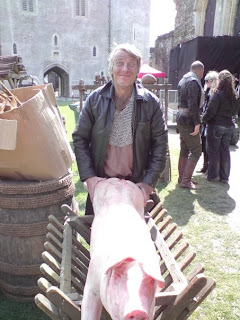 And so here's to the coming year and so to start as we mean to go on and set the tone for the coming year we present in glorious digicolor a snap of me with a plastic prop pig. However there is no truth in the rumours that I am responsible for the swine flue epidemic.
Posted by Gary Dobbs/Jack Martin at 11:29

An early happy birthday to the man who OWNS the internet right now.

Happy birthday! I know the feeling. My blog, started on an instant whim, reached it's first back in May.

So you poked a pig for your first anniversary. Can't wait to see what you do for the second!

Here's to many more and well done on making something happen.

So will the scene with the pig be in Merlin when shown on TV? I always thought it was a family show...LOL