The Bounty Hunters by Elmore Leonard 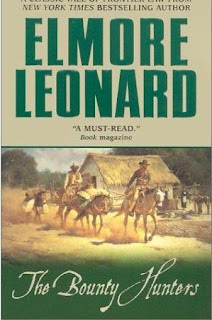 Elmore Leonard is best known as a crime writer and not just any crime writer but a master in the field. And that's all very well but the author's considerable success in the genre has overshadowed his equally good work with westerns. Everyone know he wrote the original short story from which came the movie, 3.10 to Yuma, a few even know he was responsible for Hombre and Valdez is Coming, but for the most part his western work is far less visible . Pity really because some people, myself included, prefer the author when working in the western field.

The Bounty Hunters was the author's first novel and concerns the hunt for renegade Apache, Soldado Viejo. Dave Flynn, a verteran tracker and fresh faced calvary officer named Bowers are in pursuit of the indian but it soon become evident that Soldado is the least of their worries. Early in the book they come across some burnt out wagons. The wagons have been attacked, everyone killed, some of them scalped but Flynn recognises this as a poor attempt to make the attack look like the work of the Apaches.

It's a great book with some devious plotting and a real feel for the harsh Arizona landscape - the author also knows the ways of those proud people we call the Apache but often called The Tigers of the Desert, and his pen draws them with great respect and some sadness for the passing of their ways. Flynn and Bowers are a great double act with each complimenting the other and throughout the narrative there is a feeling of hopelessness as things move towards the inevitable conclusion.

Crime fans really need to discover the western work of Elmore Leonard for it was within the genre that he honed and perfected the style that would serve him so well in his later work. But reading this, his début novel, one thing is clear - this writer hit the ground running and hasn't stopped.

USA TODAY claimed that Leonard has penned some of the best western fiction ever - I must say I concur.

RELATED: The fourth episode of The Tainted Podcast goes live tonight featured, among other things, is a look at The Complete Elmore Leonard western short stories.
Posted by Gary Dobbs/Jack Martin at 01:53