My interest in silent cinema is a fairly new one - it's developed over the last few years and now I can't get enough of these historical snippets of cinema. I've started to appreciate the skill involved in telling a story with the dimension of sound removed and Chaplin is the all time master of early comedy cinema. He was a driven filmmaker who would shoot miles and miles of film that wouldn't end up being used, a perfectionist and the first star to truly have independence from the studios and allowed free rein. Chaplin also worked without a script and allowed for inspiration to co 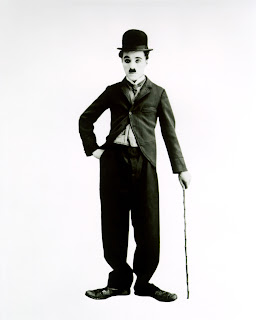 me on the hoof, as they worked. Not something anyone today would attempt.

Easy Street (1917) is an easy film to watch, even for viewers who have never seen a silent movie, and serves as a good introduction to the brilliance of the genre. Get a good print and it immediately sucks you in and the years fall away as the film somehow becomes contemporary.

It sees Chaplin's tramp joining the police force and being given the job of cleaning up the crime ridden Easy Street. It's basically one elongated chase after another but Chaplin handles the romance between the tramp and his then favourite squeeze, Edna Purveyance with a restraint that makes it all the more touching.

The chase between the tramp and the thug (Eric Campbell), several times his size, was actually filmed in one take which is incredible - it ends with the iconic scene of the tramp knocking the thug out with the gas from a street lamp. The thug in a display of strength has bent the lamp in half - Charley climbs on his back and slips the hood over his head, turning the gas on full as he does so.

The film contains much pathos - which is what people often attack Chaplin for, saying he's too much sentimental - and it was these ideals that would form much of the basis for his problems with the Unamerican committee, but it works well and anyone who knows Chaplin will know that the tramp was always human. And the social commentary was drawn from the star's own hardships suffered during the extreme poverty of his own youth. Chaplin suffered more than most - at 15 years of age he had to take his mother to the local asylum which was only the start of years of mental problems for his beloved mother. And more than once the entire family ended up in the workhouse.

Easy Street is a classic short piece of cinema - Chaplin would go on to make some all time classics at feature length - The Kid, Modern Times, Gold Rush, City Lights but this short is one of his most well realised shorts. If you've never paid attention to the silents before then check this one out - far from being outdated these films will still be watched when the CGI, big budget movies of today have long faded from memory.
Posted by Gary Dobbs/Jack Martin at 02:08

Chaplin is my all time comedy hero
Lee

It would also be a mistake to dismiss or label Chaplin's work as comedy.
He also had a strong affinity for sentimentality. The humor was his way of dealing with the soul-bearing, heart-wrenching destruction of his times. Yes he is one of the greatest comedians. I read this about him somewhere but is so true "It is doubtful any individual has ever given more entertainment pleasure and relief to so many human beings when they needed it the most"