ROY ROGERS - THE SHERIFF OF TOMBSTONE 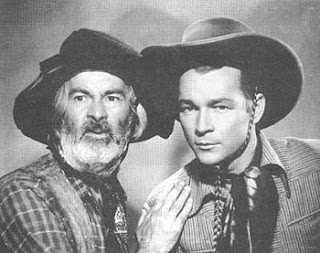 I remember one long summer when I was about eight years old and during the school holidays each weekday morning was a delight for this young western fan. For the entire six weeks the BBC was a haven for old westerns - first there would be an episode of The Banana Splits, followed by Champion the Wonder Horse and then a Roy Rogers movie. After that it was the news and then more adult orientated TV. But that didn't matter because straight after Roy Rogers I would be out the door to spend the long sunny afternoons, no doubt pretending to be Rogers when we played "Cowboys and Indians" - either that, or marbles.

Roy Roger's West was the west of dreams, where everything was black and white and the difference between right and wrong clearly defined. The anti-hero didn't exist and the good guys wore white hats, were polite to women and could strike up a tuneful song at least twice in each movie. And watching these movies now is a pleasure, they are corny sure enough but in nostalgia value alone they are price 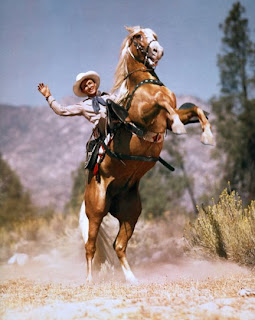 The Sheriff of Tombstone sees Rogers leaving Dodge City and then mistaken for gunman Shotgun Cassidy when he arrives in Tombstone. The crooked mayor has hired Cassidy to be sheriff so as to support his dubious silver mine claims. Gabby Hayes, here Judge Gabby Whittaker, shot the real Cassidy after taking all his money in a poker game. We assume Gabby killed the gunslinger but it's not too much of a surprise when he turns up alive, well and very mean later in the movie.


And so Roy and Gabby set out to expose the mayor. It's all good clean fun and as corny as it may be the film contains much evidence of why for millions Roy Rogers was King of the Cowboys.

The film is in the public domain and is presented in its entirety blow. Click play, enlarge the screen and enjoy fifty odd minutes of classic western entertainment.

You can also buy various DVD issues of the movie - The Elstree Hill Entertainment discs are good value because they have actually been remastered to a high standard.

When I was a kid they use to throw these Roy Rogers movies (along with war movies and a sci-fi one now and then) on the TV on Saturday afternoons. During the winters and raining days, we were allowed to watch them.

What a treat. Thanks for the reel. Great post, too. The Autry Museum near me sells a lot of these old tyme movies in DVD, which is nice because you can see the selection right there on the shelf and take your pick. Makes me want to drive up there soon and pick up a few.

We used to watch Daniel Boone.

This was a nice trip down memory lane, though I never did understand why Roy Rogers wore his trousers tucked into his boots--very geeky.

I've loved Roy Rogers ever since I saw his This Is Your Life from the fifties - a swell fella.