OK - this week myself and the other authors (links at bottom of post) are posting extracts from pretty much whatever we want. The previous three weeks themes have been set but this time head honcho, Joanne Walpole has left it up to the writers involved to select whatever extract they want to post.

So far I've given you a bit of Tarnished Star as well as my forthcoming hardback, Arkansas Smith. However this time I'm going to take a leap forward and post a snippet from High Noon Boyo - my current work in progress which is not a western but a historical crime. It's set in South Wales in 1903 and concerns events that happen around the visit of Buffalo Bill's Wild West Circus. The book is three quarters complete in first draft form and I like it because I am able to play around with western conventions in a non western setting. The research into William Cody's actual visit has been great fun and has led me to meet a man who is a descendant of one of the Native Americans who remained behind in Wales when the circus moved on. And so I dedicate this snippet to Lone Wolf Evans. 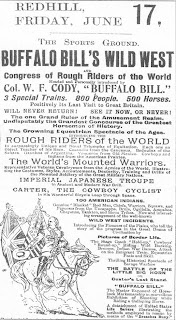 The scene here is the aftermath of a cattle stampede in the industrial Welsh town.

‘Like in the cowboy books.’ Davies said. This was just too much for the young constable and in his eyes Cody seemed to have a golden aura surrounding him, like a god walking amongst them.

Cody brought his magnificent white horse up alongside the policeman and he removed his sombrero and waved it about above his head in a theatrical gesture. The Indian rolled his eyes and rode past keeping the cattle moving forward.

‘Where do you want these walking steaks?’ Cody asked.

‘It is my great pleasure.’ Cody said and spurred his horse forward. The creature circled the cattle for a moment and then came to a perfect stop and stood facing the cattle, the horse held its head high and then reared up on its hind legs before trotting on its master’s command towards the cattle.

‘Get them in, Chief.’ Cody shouted to the Indian who nodded his understanding and drove the cattle in through the gates and past the two drovers who were pushed back against the wall, eyes full of awe as they stared up at the red man on horseback. With the sun behind him the Indian’s eyes seemed to glow like those of a cat in the shadows of his face.

Cody watched the last of the cattle go into the yard and then he dismounted and walked his horse back to the two policemen.

‘The livestock are secure.’ Cody said and bowed to the two policemen. He looked around and smiled with satisfaction when he noticed the crowd that had gathered to watch the rather unusual event. No doubt he was thinking of the increased ticket sales that this incident would inevitably provoke. This had been better than any publicity stunt he could have dreamed up and for a brief moment the Wild West had come to the grey environs of industrial South Wales.

Tonight on the Archive we have the scoop on the new Black Horse Extra as well as some news on the new Misfit Lil Paperback.

Posted by Gary Dobbs/Jack Martin at 01:09

I'm still waiting for the rest of this...

Splendid scene. Thanks for the ride, boyo.

I just wanted to let you know that one of the Fox Corporation networks has just picked up thirteen episodes of "Lawman," with Timothy Olyphant as the Elmore Leonard character U.S. Marshal Raylan Givens.

Cormac - thanks for the link to the Lawman stuff - that's another one to look forward to.