THE ROMANCE OF A NEW BEGINNING - James D. Best interview

James D. Best has a western hit in his hands with the Steve Dancy series - it seems readers have fallen for this story of a fish out of water in a western setting. A concept that goes all the way back to the dawn of the modern western with Owen Wister's The Virginian, a book which James cites as a major influence on his own work.

James lives in Arizona and is a member of The Western Writers of America. He runs a wonderful blog here which contains many links to his western based articles.


James lives and breathes westerns. A man after my own heart, you might say - I started off by asking James what the western means to him.

For me, there are three major elements of good western. The first is the romance of a new beginning, the second is the battle of good versus evil and the third is the lone warrior who sets things right.

The old west represents a new beginning in a fresh place away from home - the shrugging off of disappointments and a chance to start all over again. Emigrating to a frontier means you get a do-over in a land with no rules, no referees and no fences. The mythical old west is a black and white world. Good fights evil and good always triumphs. In stories of the Old West, ordinary people are capable of extraordinary heroism. But raw frontiers are dangerous, so even courageous pioneers need help. No civilisation means no restraints on bad people doing bad things. Help comes in the shape of an idealised hero, a paladin who risks his life to save the day and asks nothing in return.

These themes have been a part of storytelling in every society since the first cave drawings. You'll also find these elements dominate fantasy and science fiction. The frontier in these genres can be the future, outer space or make believe land. The gunfighter has a simple solution on his hip but Frodo has the ring and Harry Potter the magic wand.

The two titles, thus far, in James's Steve Dancy series -The Shopkeeper and Leadville are intriguing titles for westerns. I asked James to describe his work to new readers.

The Shopkeeper and Leadville are traditional westerns with a non traditional hero. Steve Dancy, the main character in the series, is a New York City shopkeeper that sells his business and ventures west to write a book about his adventures. He's rich and capable, but flounders a bit in a foreign setting. There are few cowboys in the series. Instead the story centres on mining, which was probably the biggest impetus to migration from Europe and the eastern seaboard. I look at the series as a fish-out-of-water story, which looks at the Old West through fresh eyes.

The you tube trailer for The Shopkeeper is superb, very professional. I wondered if James did this himself?


Yes. I've made amateur family movies on the Mac for years. I wasn't sure, still aren't if book trailers sell books, so I decided to do it myself.

My favourite western is The Virginian by Owen Wister and Mark Twain's Roughing it. Wister left Philadelphia to explore Wyoming and made himself an observer in his famous novel. This was the inspiration for The Shopkeeper. I thought it would be fun if the city slicker got involved in the action, instead of just reporting events. Roughing It on the other hand is justly called a travel book but it's about travelling around the western frontier in the mid-nineteenth century. These books appeal to me because the writing in excellent and the writers actually saw the Wild West.

The western seems to be coming out of a long slump. Where does James see it going in the future?

The western used to be a stable of fiction, Hollywood,television and daydreams. In 1959 there were 26 western series on US prime time television. The big names did some wonderful quality stuff but the demand was so great that a lot of trash made it onto the screen and into print. The public got tired of the same old stories and the focus shifted to the anti-hero. I believe traditional heroes, good writing, sound plots that move with assurance and great characterisation can life the genre and make westerns once again a part of the popular culture.

That you used an Easterner as the hero in the Shopkeeper allows for the reader to more easily identify with the character. Since the land and events are new to both reader and character. The main impetus behind the Shopkeeper is mining, which is not that common in westerns these days. What is your 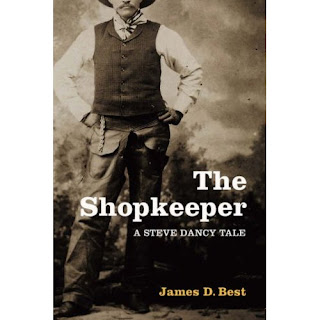 I wanted the Steve Dancy series to appear fresh and another cowboy epic didn't quite make it for me. Mining had an unbelievable pull on people and was a neglected element of the Old West. If you watch most of the Tombstone set movie it is hardly mentioned that the town was really a huge silver mining camp. Miners and mining provide a whole new category of stories to write.

Leadville is a sequel to The Shopkeeper - what can we expect from the character in the future?

That's a tough one since I don't want to give too much away. The first book took place in Nevada and the second in Colorado. The next book in the series, Murder at Thumb Butte takes place in Prescott, Arizona. I have a rough plan for the next three books and I'll only say that Steve will be in Tombstone in 1881.


Okay James here's where The Archive gets all tabloid - two questions to end. Desert Island Western, film and book. And John Wayne versus Clint Eastwood - who wins?

The book is easy - Lonesome Dove. I believe this is the best western ever written. Film is much harder as I love so many but I think if pushed it would be The Man who shot Liberty Vallance. Great screenplay and an exceptional cast.

John Wayne versus Eastwood - that's not fair since whatever answer I give will upset half my fans.Okay, I'll go for Wayne. Ol' squinty eyes would bring a pistol to a rifle fight.

Thanks to James for his time and the Archive looks forward to many more Steve Dancy adventures.

Posted by Gary Dobbs/Jack Martin at 09:44

Terrific interview! One of my favorite features on The Archive. Original questions and insightful responses - thanks again, Gary.

Thanks Cullen - course it's the subject that makes the interview and James was very forthcoming. Will have more interviews for you soon.

After reading "Leadville" which I completed recently, I have to get started on "The Shopkeeper." Steve Darcy is a wonderful character and can't wait to see whats in store in "Murder at Thumb Butte." James D. Best is a master storyteller.

Gary: Also love the "tabloid" questions at the end. Like Mr. Best, I am also a big fan of "The Man Who Shot Liberty Valance".

Have seen The Shopkeeper on many lists and have read many comments about it and James D. Best's writing and have always wondered whether to buy it or not...think you're interview has made my mind up to track down a copy.