Borders have been under performing for some time and today the company have announced more closures by trimming it's UK operations - the closures include my own local store at Talbot Green, Llantrisant. As soon as I heard the news I went to the store and found a manic 50% off everything sale going on. This is the busiest I've seen the store in months but it was with a heavy heart that I handed over £50 at the till for a hund 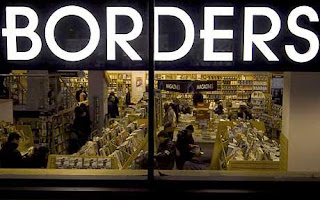 red pounds worth of books, CD'S and DVD's. I really would rather pay the full price if it meant that Borders would stay.

The news is of a worry not only to book buyers but especially to writers who can only look on in dismay at the supermarkets growing share of the book market. The Society of authors released the following statement:

The Society of Authors believes that if any Borders stores close, further market share will be handed to supermarkets, which have made a big move into book retailing. The focus by Tesco and Asda on selling high volumes of a limited range of best-sellers will lead to 'fewer books by good authors' being published, the society believes. 'It is worrying and authors are very anxious about it. The high street is so important when it comes to publishers deciding what is published,' said Mark Le Fanu, the writer and general secretary of the Society of Authors.

On a personal note I am gutted as Borders served me well in that I was able to pick up many import books and magazines that I didn't see elsewhere and although I've been pleased to buy heavily discounted books in Asda and Tesco's the fact that they only seem to carry the bestsellers is indeed worrying. It was through Borders that I discovered writers like Richard Stark, Elmer Kelton, William Johnstone and others who don't have a big profile over here in the UK. I was also able to buy the entire Hard Case crime range in Borders and I've not seen these titles in any other book shop. W.H.Smith's is crap and stocks a similar range to the supermarkets only at much higher prices. How long will Smiths, an icon of the UK High Street survive? Once it would have been unthinkable to consider that Smiths would not be around forever but then two years ago if someone predicted Woolworth's closure they would have been laughed at.

Years ago I applauded the abolishment of the NET book aggrement but now I'm not so sure, with the aggrement in place the supermarkets wouldn't be able to discount so heavily which will eventually damage the book business. Not so long back the supermarkets were offering the Harry Potter hardcovers on the day of publiction for £1 - who benefits from this madness? The supermarkets treat the books as loss leaders but it looks now as if all this madness will affect real book lovers, people who enjoy browsing in good bookshops and being served by knowledgeable staff. In the supermarkets the staff don't even know anything about their Baked Beans let along what books a certain author's written.

"In a statement Phillip Downer, chief executive of Borders said: "Several weeks ago, the directors of Borders UK confirmed to our staff and our key suppliers that we were exploring funding opportunities. As a consequence of this action, we have now agreed to sell the leasehold interest on five of our stores to a major fashion retailer. The five stores are Blanchardstown, Llantrisant, London Colney, Oxford Street, and Swindon."

The Tainted Archive can reveal, exclusively that it is NEW LOOK who have bought the lease on all five stores - this has not yet been announced but I was told so by a disgruntled member of Borders staff.

To be honest though I've suspected this was on the cards. The staff at Llantrisant Borders are wonderful but the writings been on the wall - first some of Borders floor space was taken over by GAME, shelves were being left empty, GAME were allowed to set up one of those guitar heroes thingies in the middle of the store and book browsers were driven away by the awful electrionic noise made by all the kids playing on the demonstration game, books ordered would fail to arrive and the normally decent western section shrank to six bloody books, five of them Louis L'amour.

It's all so very bloody sad.
Posted by Gary Dobbs/Jack Martin at 08:43

Is the book business dead

Archavist: That wave of Border closings hit the US about two years ago, including my local store in Boynton Beach, FL. A $10.00 shoe store took its place. It was the best bookstore in the area. Heartbreaking.

Soon, we booklovers will be forced to memorize books, ala fahrenheit 451 so they won't be lost entirely. -- Mykal

It would be nice if the smaller local shops would make a comeback instead. But I suppose that's a false hope.

Sad news indeed Gary. We were going to get a Borders in my home town but it never opened. The only place to buy imports is Waterstones to my knowledge...I very rarely go into town, about once every five years or so.

I remember when the PC westerns were on the shelves that supermarkets had spinning racks by the tills jammed packed with westerns, war and horror books. Maybe we can hope for a return of these, but I think that's wishful thinking.

So many people just don't read anymore, i couldn't go through life without a real book in my hands and visiting the world the author has created.

It's very sad, and it's true that the abolition of the Net Book Agreement has had some unpleasant and unintended consequences for our business.

Arsebiscuits. Borders are one of the better chains, not saying much but infinitely better than Asda etc., and as you say WHS is a spent force. Sad day indeed.

I think I've already mentioned in previous comment here how Borders sold its stores in this part of the world (Australia, New Zealand and Singapore) about a year ago.

I'm with yourself, Charles and Steve M on this one. The state of publishing and bookselling has never been more irrational, chaotic and depressing.

The situation is very much to the forefront of my worries about the chances of re-establishing any paperbacks of the kind Steve describes.

David Whitehead tells me the Misfit Lil paperback announced here yesterday is being listed online with a UK price of £11. Unless that can be lowered/discounted, I will say now that particular project is doomed.

The heart of the problem is that to accommodate the inefficiencies of retailing, a book must be sold at a price which is at least twice what it costs to produce.

The Borders near where I live is doing a good job of gutting the entire music section. Not sure what the plan is, because the section has been empty for a couple of months now.

Always sad to hear of a bookstore shutting down. We used to have several good independent bookstores in Atlanta, but the big chains like Borders and Barnes & Noble were killers, and many of the small shops closed up several years ago. But, a Borders in my neighborhood has also closed. However, i have another Borders and two B&N six miles away.

My question about all this is: is the future in books going to be electronic devices like Amazon Kindle? I prefer owning and reading an actual paper book, but if it means access to any book published, then maybe there are some pluses for the publishing and reading business. Thoughts?

Frank - I'm more and more inclined to think the future will be digital and I'm working on a post on this very subject.

I'll be on the lookout for your column. I have yet to actually hold a Kindle or equivalent, so i am not sure how much i would hate/dislike or possibly even like it. Just seems ... wrong, somehow!

Right now, from what I have observed, the price for downloading seems to be about half the price of the HB edition. Seems like that price point allows for a good profit if the book is never printed to begin with. Wonder if the price would drop accordingly if no hard copy were ever made and no expenses incurred? Time will tell.

Frank - I've held the Borders own machine and it looks wonderful and Charles Gramlich, who regularly comments here and has so above, has written lovingly about his own Kindle on his blog. I too prefer real books but then a few years ago I said MP3'S would never replace my discs and yet these days I'm never without my IPOD.

Point well made. One thing I've observed about technology: you can either embrace it or get swept aside.