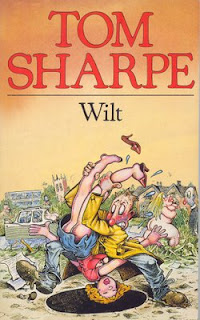 
Not sure if this really qualified as a forgotten book,it's still in print, but it's certainly not as well known these days as it should be. It's a comic masterpiece. There are so many great set pieces - the interrogation between Wilt and Police Inspector Flint are excellently structured with dialogue that reduces me to tears of laughter. Wilt, you see, is suspected of killing his wife after disposing of a rubber sex doll by stuffing into a hole that is then filled with concrete. Though in actuality Eve, Wilt's wife, has run off and is busy trying to avoid being seduced by a vulgar American lesbian. When the doll is eventually excavated Sharpe piles more comic mayhem upon mayhem.

I must have first read this book when I was a teenager and I've read it several times since - as well as all the other Wilt titles. But this book, which introduced the downtrodden Wilt is the best of the bunch and given the quality of all the other titles that is very high praise indeed.

The book could have only come from a British writer - it's imbued heavily with the type of saucy humour that has filled the Carry on films, inspired many dirty postcard images and should have schoolboys snickering in school yards up and down the country. But it's need not be insular and it has universal appeal.

I love this book with a passion - it's one of the funniest things ever written but it's paced like a thriller and uses many conventions of the crime genre - missing wife, husband wrongly suspected of murder - in order to tell its story. And the author is a genius for dialogue and the previously mentioned scenes between our hero and the no nonsense copper, Flint are a master-class in comedy writing.

The book was made into a movie starring Griff Rhys Jones and Mel Smith but although the film had its moments it was flawed and didn't contain a single iota of the class of the original novel. The film was average but the book is excellent - one of those that you feel sad when your read the last page simply because it's all over and you never wanted it to end.
Posted by Gary Dobbs/Jack Martin at 01:06

New to me and it looks charming.

Yeah, I think it qualifies as a forgotten book as Pcness has pretty much buried Sharpe's output. I read a few of his again recently and still found them laugh out loud funny, not the usual wry quiet smile that you get with most comedy novels.

My favourites were his first two set in South Africa, and reading them again I was pleased that time hadn't rendered them unacceptable despite the comic take on such things as terrorism.

That PCness makes the world a very sad place these days. And judging from what I hear, it is at its worst in the UK. Tom Sharpe buried? Bad news, but somehow not surprising.

I read it when I was a student, and loved it.