Supermarket giant, Sainsbury is to relaunch its adult book club and also launch a children's book club as part of its increased focus on books. The chain will also increase book display space by 10% in most of its stores up and down the UK.

Russel Brand's sequel to the successful My Bookie Wookie has been pulled from the Autumn lists by Harper Collins. The reason given was that Brand has been tied up in film deals since being sacked from Radio 2 and is unable to complete the book on time. The book is now slated for Autumn 2010.

Big news for overseas fans of the Black Horse Western books who shop with The Book Depository - The company will open a new North American website next month - the same free postage anywhere in the world deal will stand, but it will now be quicker for those outside the UK to get their Black Horse Western titles. 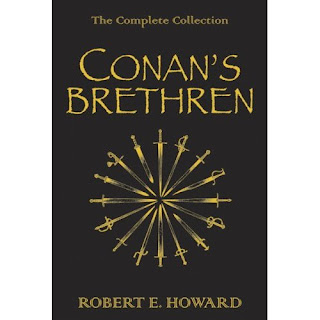 Gollancz's previous Big Black SF titles have done so well that the company are to beef up the list with with new collection from Jack Vance and a collection of non-Conan tales by Robert E. Howard. The latter will be titled Conan's Brethren - no doubt in order to still have the selling power of the barbarian. Stephen Jones will pen the introduction to the stories.
Posted by Gary Dobbs/Jack Martin at 05:16

Conan's brethern. Sounds interesting. I've got most of Howard's stories in multiple formats by now.