Keith Chapman AKA Chap Okeefe tells me that things are moving on nicely with his new publishing venture, as reported on the Archive recently, which will put inexpensive pocket sized paperback westerns onto the market. The first title has now been assigned an ISBN number and Keith tells me that all will be revealed very soon - Keep an eye on The Archive for details as they become available. 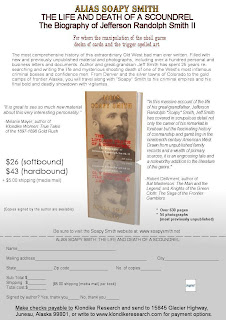 Also western related is the attached AD (click image for enlargement) for Jeff Smith's eagerly awaited history of his grandfather, Jefferson Randolph Smith, the old west bad guy more commonly known as Soapy Smith. The book comes out mid August but orders are being taken now. Expect an interview with Jeff via Skype on The Tainted Podcast sometime this August.

Cowboy and Aliens, a SF western, looks to be the next major project for Stephen Speilberg. The long gestating project is now in the pre-production stages.

The next Wild West Monday will be the second of November 2009 - western fans around the world will that day unite in support of our beloved genre. Stay tuned to The Archive for more details and if you haven't signed our petition in support of the western then please do so. You'll find it in the right hand sidebar of this blog.
Posted by Gary Dobbs/Jack Martin at 11:24

All sounds good. I might watch a movie called cowboys adn aliens.