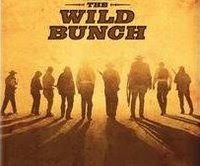 This is the brainchild of Black Horse writer Terry James, AKA Joanne Walpole - for the next few weeks Jo, myself, Jack Giles, Lance Howard and I. J. Parnham will be posting themed extracts of our work. This week it's the turn of the hero - I like this idea as it should give readers a taste of a diverse bunch of writers and so throughout July this wild bunch will be riding every Wednesday.

Hopefully Jo can make this a regular thing and feature another bunch of western writers next time because this is a great way to highlight the wealth of writing talent collected together under the Black Horse imprint. Check out the entire range here

So here's my extract - It's from Arkansas Smith which will be published by Robert Hale LTD on their Black Horse Western imprint in March 2010. And remember The Tarnished Star is available now anywhere books are sold - click on the picture in the side bar for more details.

Arkansas reached out a hand and helped the old man up onto the cart and then, ignoring the two men, drove in the direction of the doctor’s place.

‘You really Arkansas Smith?’ The old man asked as they turned the cart onto First Street. ‘I knew you was someone. Yep, you can tell that from the way you hold yourself. Mighty proud, like a strutting rooster.’

‘You calling me a chicken?’

For a moment the old man looked unsure of himself, scared even, but then deciding Arkansas was joshing on him he smiled. ‘Don’t think I’d call the great Arkansas Smith a chicken or anything else for that matter.’he laughed. ‘Hell no. Arkansas Smith, a chicken – no siree.’

Arkansas looked at him, said nothing, and merely offered a grim smile in reply. He cast a glance over his shoulder and noticed the two men called Clay and Jim had not moved and were still standing in the street. He guessed they’d try and put a bullet in his back if they could only be sure of killing him.

‘I heard of you.’ Rycot said. ‘Everyone’s heard of you. They say you were born on a battlefield. They say you’re faster than all other men rolled into one. They say you once faced off six men all on your lonesome and put three of them down before they’d even cleared leather. They say you’re so fast the wind can’t even catch you from a standstill.’ The old man became particularly animated and he slapped his thigh in delight.

‘Is that what they say?’ Arkansas considered the old man with some amusement.

Posted by Gary Dobbs/Jack Martin at 01:25

I learned more about friendship and friends online in your blog and I need to get more friends thorugh you blog to my social networking website and Online friends community to get more entertainment with online friends.

Well you know any guy with Arkansas in his name is gonna rock.

What a great idea!

While on the subject of excerpts, please can I mention to those who haven't revisited Black Horse Extra this week (link in Gary's sidebar to right) that a new book excerpt was posted on Monday?

It's "The Kid and the Cougar" -- the first chapter from the forthcoming Black Horse Western Misfit Lil Robs the Bank -- and is relatively self-contained.

You can also go to the excerpt directly at www.geocities.com/chapkeith/bhemrb