ton was British radio's first ever super hero - the original idea came from Norman Collins, then head of light entertainment with the BBC, when in 1946 he sent a memo to all departments asking for ideas to develop a kind of daily cloak and dagger soap opera. The idea quickly progressed and soon a series called, Bill Barton was being worked on. However the name was later changed to Dick Barton.

The first series of ten episodes was began on 7 October 1946 and, typically of the BBC at the time, the episodes were wiped soon afterwards. However in 1972, as part of the BBC's Golden Jubilee Celebrations the original team returned to the studio and re-recorded the original run of ten episodes. Incredibly the BBC once again didn't archive the series and the current CD Audiobook of the show came from fan recorded tapes. The entire show is in the public domain and the first series of ten episodes can be listened to in the player above.

There is also a double CD available as part of the BBC Radio Crimes series of audio dramas. It's great to listen to now and some of the lines are humorous when listened to with modern ears. 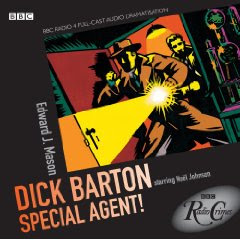 'I like my women out of dangers way. At home in the kitchen.' Says Barton at one point.

In its heyday the show was attracting 15 million listeners daily and was spun off into books, movies, comics, a short lived TV series and even a stage play that toured to great acclaim. It was considered too thrilling for young children and the Times newspaper famously ran an headline that read, 'Dick Barton too exciting for girls? Headmistress says, yes"

It's great nostalgic listening and still thrilling when you get into the story. Expertly voice acted, brilliantly directed and with incredible sound quality - I listened to the CD version while on a long car journey and I enjoyed every minute of it. The Radio Crimes series of CD's are well worth buying - other shows are Farewell my Lovely, The Maltese Falcon, Monk's Hood, A series of murders and Father Paolo Baldi. But if you want some immediate thrilling adventures then who not listen to the entire ten episode run of Dick Barton Special Agent in the embedded player above.
Posted by Gary Dobbs/Jack Martin at 10:36