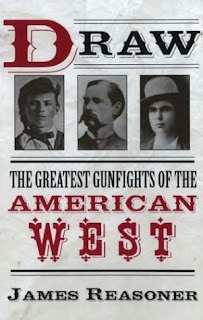 As soon as I saw this book, penned by our good friend James Reasoner, looking down at me from the shelf I knew I had to buy it. I'm familiar with James' western fiction but the fact that he had written this non fiction study of the West's greatest gunfights came as a surprise. And a nice surprise at that.

The book is split into six sections, each containing several chapters devoted to true events and people of the American West. The sections are - man to man, gangs, posses, hold-ups, back shooters and finally gun fighting mishaps and misfortunes. I particularly found the chapter on Luke Short interesting but then I'd been reading a lot about the diminutive gambler lately and the entry in this book perfectly complimented my research.

All of the well know gunfighters have chapters devoted to them as well as several of the more obscure characters that have become footnotes in western history. As expected the book is well researched and perhaps because of the author's experience as a fiction writer it is more than a staid list of dates and facts. Reasoner goes to great pains to flush out the historical characters as much as possible. I only bought the book this morning and spent a couple of hours this afternoon going through the first hundred pages - true it's a reference book that I will refer to from time to time, whenever a fact is needed, but it reads so well that I found it hard to put down. And will, no doubt, finish it this evening.

The author mentions in his introduction that most of the research was done by his wife, Livia so much kudos must be laid at her feet. This book has enough meat on its bones to interest Old West buffs but the writing style is so immediate that casual readers with only a passing interest in the subject will find it interesting. There' some nice photographs in there too.

A great introduction into gunfighter lore and those heady days of American history known as The Wild West.
Posted by Gary Dobbs/Jack Martin at 10:08

I would enjoy Draw as well and its been duly noted. I'm reading Robert J. Randisi's Beauty and the Bounty at the moment and Luke Short makes an appearance. Recommended also, if you haven't read it yet.

David - that's a new one to me. I'll Google it and see if Amazon have it. Great to see Tarnished Star on your "Reading" list on your blog the other day.

Thanks for the kind words, Gary. DRAW is my only book-length excursion into non-fiction and I had a lot of fun writing it, as well as learning some things I didn't know.

I've got this on my bookshelf. It's a nice book to flick through from time-to-time.

I got this book when I was in Austin but I still haven't read it. Looks great though.

James - I found the last section dealing with mishaps and gun fighting accidents hugely interesting. There was a lot there I didn't know. You will be pleased to know this book now takes place on my reference shelf sandwiched between Dee Brown and Casey Tefertiller.

That's mighty good company to be in.