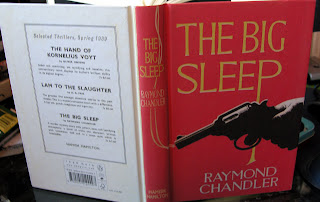 It was about ten thirty in the evening, Late July, with the night overcast and the rain obscuring the hills of the valleys. I was wearing my striped jim jam bottoms, with a black T-shirt, Simpsons slippers and pastel blue boxers with little puppy dogs on them. I was scruffy, tired and didn't care who knew it. I was everything the lazy reader ought to be. I was going to read The Big Sleep for the first time. And before I knew it half the book had gone and the night was pushing towards a damp miserable dawn.

Firstly this isn't a review as such - how could it be? How could I offer anything constructive apropos to this widely acknowledged masterpiece? But even though I knew the story backwards, had listened to it as both an audio play and a audio book and had seen the film many times, I had never read the original book. Indeed until now the only Chandler novels I had read were The Lady in the Lake and Poodle Springs. But these facsimile first UK editions from Hamish Hamilton/Pan were enough to provoke me into buying the entire set. There are five in this set, released to celebrate the seventy years that Hamish Hamilton have been publishing Chandler. That's The Big Sleep, Farewell my Lovely, The Lady in the Lake, The Little Sister and The Long Goodbye. All of which are direct copies of the original UK editions.

They're lovely looking book and complete replicas of the original UK first edition - everything is as it was then. Even the back cover features a listing of other thrillers released that month in 1939, none of which have survived the test of time in the way The Big Sleep has. What can I say about reading the book as a new reader today? Well obviously the style reminded me of the Robert Parker books as well as most of the other private dick novels I have read but Chandler was there first, his was the blueprint was both the brevity of style and the lone PI character himself. It reminds me of listening to the radio in 1995 when The Beatles reworked an old Lennon demo 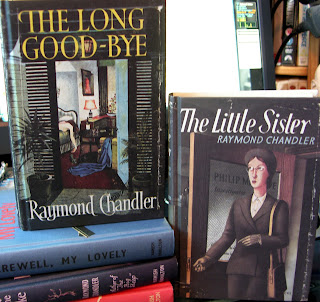 into the all new Beatle song, Free as a Bird. Anyway this young kid was being interviewed as part of a radio road show and the Beatles song played to him. The kid said they sounded OK but were copying Oasis's style. Same thing with Chandler - reading him now the uninformed would say this guy is too much like other PI writers which is testament to the importance of Chandler and Marlowe and of how they set the benchmark for others to follow.

One thing I especially liked about these books is that the covers are printed with the odd blemish and scratch so that they actually look aged - though of the quality that would be defined as very fine or whatever the category they use for very very good condition.

And back to The Big Sleep - well I'm not qualified to give any major insight but I am perfectly enabled in saying - that it reads as well today as it would have ever done. It's pacey, not dated in the slightest and the character of Marlowe is as contemporary as tomorrow's headlines. I can't read Marlowe without seeing Bogart's mug in my mind and that's not a bad thing - that ugly, handsome face fits the pivotal private eye like a glove
Posted by Gary Dobbs/Jack Martin at 01:02

Love your opening. This was definitely a good book.

It's a great feeling when you discover an author or his or her work. There are many, among them Richard Matheson, Bram Stoker and Aldous Huxley. I 'discovered' Chandler during a lengthy hospital stay forty years ago and was addicted. Shock horror, hold the presses: I became an addict while in hospital...
Yes, I liked your opening too. Great stuff.