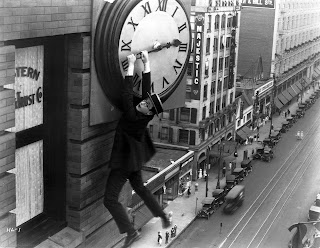 Harold Lloyd's glasses character was the proto-type lovable geek, the boy next door, an everyman with romance in his heart but not too much in his head. Though that's not strictly accurate - the glasses man was far from stupid but he sure enough found himself involved in some dumb situations.

Safety Last is a silent movie that still thrills to this day and it is difficult to think of a big budget modern movie that manages to thrill, scare and delight quite so effectively as Safety Last. The final 20 minutes will literally have the viewer's heart in their mouth as our hero, forced to scale a skyscraper, performs one of the most memorable series of stunts and gags in motion picture history. The climb up the building is pure cinema - with an inventive series of obstacles getting in the way of the intrepid glasses man.

With a climax so intense, so powerful the rest of the film is somewhat overshadowed but there's much to enjoy in the f 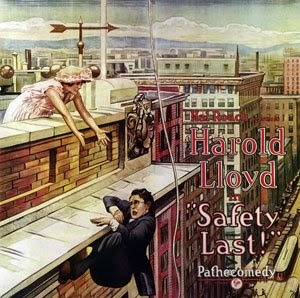 irst part of the film where there are many fine quiet moments and scenes of inspired comedy. The problem is that store clerk, Lloyd has told his beloved that he is the managing director of an impressive department store. There are some great visual gag scenes such as Harold using the reflection in a bald man's head to comb his hair and a fair few frantic chases. One of the best is when Harold fearing he will be late for work hijacks a number of vehicles in a frantic dash across town. At one point he even feigns a heart attack to get a ride in an ambulance that is going his way. When he reaches the store he has to sneak in and by disguising himself as a mannequin he manages to get carried in. Though he sneezes and sparks off another hilarious scene as the guy carrying him is terrified out of his mind.

Don't think of this as a silent movie but think of it as pure cinema. It really is sheer brilliance and the current DVD release, the Optimum box set, contains a print of the film which has been remastered to a very high standard - the black and white picture is without blemish and the new musical store is very sympathetic to the images on screen. The romantic ending even managed to get to an old cynic like me.

TRIVIA: Harold Lloyd out-grossed both Charlie Chaplin and Buster Keaton during the 1920's.

Lloyd actually filmed the daredevil climb first with no clear idea of how they would get to that point. Like Chaplin he was working without a script and hoping inspiration would come. Thankfully it did.
Posted by Gary Dobbs/Jack Martin at 02:11

I adore Harold Lloyd. Thanks for writing this and reminding me of that fact. BTW - trivia - did you know that the final scenes of Westworld where the hero emerges into the garden scene was filmed on Harold Lloyd's estate? Have a nice weekend.

This is one of my favorites of all time!

Joanne --that's really interesting about Westworld. I'll have to check it out!

Like all the best comedy sequences, the climb in LAST is basically a suspense scene.