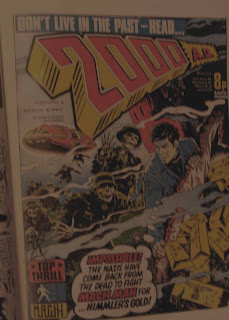 M.A.C.H. 1, real name John Probe appeared in the very first issue of 2000AD way back in the day. I loved this character so much as a kid that I remembered creating my own version of the character in rough twelve year old handwriting. Just as people these days write fan fic about Star Wars, James Bond or even Buffy then so too did I, as a kid, write my own M.A.C.H. 1 novels. I called my guy The Ultimate Spy and he was very much a rip off of M.A.C.H.1 but that was okay since M.A.C.H. 1 was very much a rip off of TV's The Six Millon Dollar Man - only much more gritty.

M.A.C.H. 1 stands for man activated by compu-puncture hyperpower and John Probe was the first so he was M.A.C.H 1- however we would find out later that there was actually another man who went through the process of compu-puncture but it went wrong and turned that man into a hulking brute called M.A.C.H 0. later we would also learn that the Russians had also been experimenting with the process when they sent their super hero, a woman, to kill Probe.

The first episode saw British agent, John Probe (he was even drawn to look a bit like Lee Majors.) undergoing the final part of the experiment that would turn him into a super secret agent. The character was created by Pat Mills and the artist on these early episodes was Enio. The strip ran to 64 weekly episodes with the character becoming more and more anti-Establishment as time wore on. By then end of the stories run , after some 64 interrupted weeks, John Probe had turned against his creators in the British government. This was a time when the UK was in Socialist meltdown with three day weeks, flash strikes across the public sector, the electricity being turned off most evenings to save Britain's dwindling resources and Punk Rock had given the Establishment a good kick in the arse.

In this first episode we learn that Probe's boss is the sinister Sharpe and that Probe's compu-puncture has given him super strength and endurance. He can also talk with the computer inside his brain which was a useful device for the writers to advance the story. Before his training is complete Probe finds himself thrown into action when a group of terrorists attack a R.A.F base at Cottesdale. Suffice to say Probe saves the day but little hints are dropped that the compu- puncture whilst turning him into a superman also has a dark side. 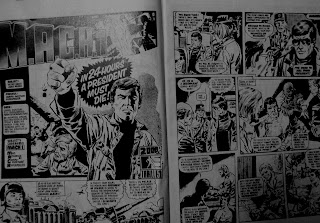 Right from the start 2000ad was edgier than most British boys comics, which is perhaps the reason why it is still running today. And all the stories had grit to them - another early story saw John Probe sent to execute the president of Iranian and stop him from sending his armies in to invade Turkostan.

In the early days of the comic M.A.C.H. 1 was my second favourite character (my all time fave was Volgan basher, Bill Savage) and I was not alone - in Dec 2004 when 2000AD published a collection of the early strips it was announced that initially the character was more popular than Judge Dredd and Dan Dare combined.
Comic books were great in those days and each week I would rush to the newsagents clutching my 8p for the lastest issue of 2000AD (the current comic costs £1.90) and rush home for my weekly fix - usually with some Black Jacks and Fruit Salad sweets to chew on while I devoured the latest adventures and wallowed in the thrill power . That's what they called it - THRILL POWER - and the comic would often print warnings before stories, "WARNING THRILL POWER OVERLOAD"

Judge Dredd, Dan Dare (2000ad's cyberpunk rebranding of the character), Invasion 1999 (Bill Savage kicking Volgan arse), Flesh (future time travellers set up meat processing plants in prehistoric times to feed people of the future when all animals are extinct), Harlem Heroes (a sort of futuristic Harlem Globetrotters) and of course M.A.C.H. 1. Incidentally Flesh was a western set in the future - since the people at the meat plant were called rangers, dressed like cowboys and the first major series took place in a frontier town called Carver City - I'll write a post about Flesh one day.
Those were the days indeed!
Posted by Gary Dobbs/Jack Martin at 10:53