Paul Merton is a British comedian with a passion for silent cinema, more specifically silent comedies. He hosted the BBC show Silent Clowns, which was essential viewing for anyone with an interest in the subject. Well researched, put together in Merton's usual dry style and featuring many long forgotten clips of the greats - Chaplin, Keaton, Laurel and Hardy, Fatty Arbuckle, Mabel Normand, Harold Lloyd. This book is a companion to the TV series and is quite brilliant - it's impossible to read without putting together a list of silent classics to track down. 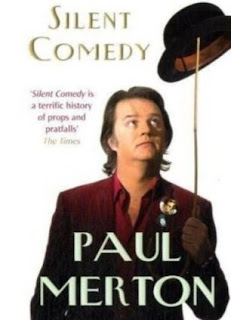 Merton't knowledge is immense - every film he discusses is dealt with in great detail. For instance I found the piece on Chaplin's Kid Auto Races very interesting and I had to watch the silent short after reading the entry. Merton tells us that there was animosity between Chaplin and the director, Henry Lehrman. At one point Lehrman forcefully pushes Chaplin out of shot - the move is quick, aggressive and Chaplin has no time to perform a comedy fall. When Chaplin comes back into shot he is clearly angry - all this is captured on screen and can be seen on this post as the entire short is embedded into this article. It is worth noting that Kid Auto Races was the first time Chaplin presented his tramp character - he is wearing trousers borrowed from Fatty Arbuckle.

The book is set out in a narrative form that traces each comedians history in relation to his/her peers. There's some great trivia - that Stan Laurel understudied Chaplin is well known but mostly everything in this book was new to me.

I've enjoyed the old silents for a number of years now and always intended to find out more about this unique period in cinema's formative years and this book is a damn fine place to start. I would urge anyone with an interest in silent cinema to seek out a copy - you won't be disappointed. A good thing is that most of the silents are in the public domain and can be found on budget DVD copies or on the internet itself - a good source for silent movies is You Tube and Archive.Org

Posted by Gary Dobbs/Jack Martin at 02:08

Yeah, that was a good show. I was really irritated that I didn't spot it until the day before when Paul's travelling show on silent comedy came to the local theatre. It'd sold out, so I guess lots of people really enjoy this stuff too.

Terrific post. As you know I'm a nut for the silents. And the comedies survive best with Chaplin, Keaton, and Lloyd leading the pact. If you get a chance check out Keaton's very funny SHERLOCK Jr.

And the Merton book will be added to my list. Thanks.

Ian - I missed the show when originally shown but managed to download the episodes.

David - I've got DVD's of The General and Steamboat Bill - I'll look out for Sherlock Jnr. Maybe try and find it online.

It's on YouTube. I posted it about a year ago. Simply brilliant, though, THE GENERAL is considered his masterpiece.

I'm a huge fan of Chaplin, Keaton and Lloyd. If you get a chance, check out the weird world of Charlie Bowers. A true revolutionary in stop-motion animation, he's almost forgotten today. There's an IMAGE DVD set available, and his "Metal Eating Bird" wherein an entire automobile hatches out of an egg is at YouTube.

David - I'll email you for your postal address as I'll have to send you some discs with Merton's TV series Silent Clowns - you'd love this.

Richard - I watched the you tube video - awesome, great. will find out more.