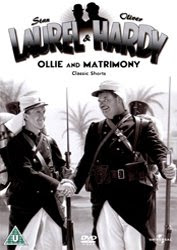 These Universal Laurel and Hardy DVD's are excellent - There are 20 discs in the entire collection and I've managed to get hold of 16 of them thus far and will complete my collection when I come across the missing titles. Each disc usually offers episodes in both original versions and colourised versions. Purists always knock the colourised versions and they may have a point - the skin tones can appear odd for a start but I watch the colour versions when available - there's no particular reason for this other than the fact I can still enjoy them in their new colour versions.

The colour version on this disc runs almost a minute longer than the black and white version though there are no extra scenes. This is probably due to the film being transferred at a slower rate during the colouring process. 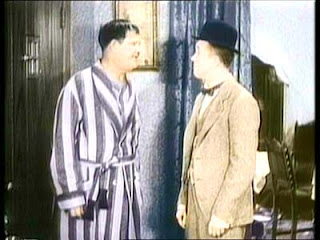 same frame to the left in its original form and in the colourised version. Note this still is not from Beau Hunks but Our Wife which is also on the Ollie and Matrimony disc.

Beau Hunks (also known as Beau Chumps in the UK) sees Stan and Ollie run away to join the foreign legion after Ollie's heart is broken by his beloved Jessie Wessie. We never actually see the woman who broke Ollie's heart by breaking up with him just as they are about to be married but the woman in the picture he carries is Jean Harlow. It's a running gag throughout the film that every legionnaire seems to be carrying the same picture. When this film was originally released Harlow was a big star in her own right, the premier sex symbol of the Thirties in fact, and so it must have been a gag for the producers to use the shot from one of her old Hal Roach comedy appearances. A gag that will sometimes go over the head of modern viewers but not a sad old film buff like me.

Comic hi jinks ensure and as well as the usual physical comedy there is some great Laurel and Hardy'esque dialogue.

Commander: Why did you come here?

Stanley: We came here to forget.

Commander: To forget, forget what?

The Laurel and Hardy comedies have always reduced me to tears of laughter and they still have the power to do that. They are so corny, often obvious, but to my mind there has never been a better comedy double act. Man, I grew up watching these shown in the early evening slot on BBC2 and it's such a pity they are so rarely shown these days. In fact I seem to remember there was also a Laurel and Hardy cartoon series that often ran on BBC1. Watching them marching through the desert, Ollie unknowingly also having Stan's equipment in his already over loaded back pack, or witnessing them defending a fort from bloodthirsty and shoeless bandits with drawing pins - these comedies are certainly timeless and appeal to all ages.
Posted by Gary Dobbs/Jack Martin at 10:28

My mom is a big fan of Laurel and Hardy and so am I, though, Abbott and Costello remain my #1 favorite comedy duo from the old days.

And I prefer the black and white photography.

There was something quite sad about Laurel and Hardy. They lived in their own universe--one that was not always pleasant.

David and Patti - there was a play on Radio Four called Stan - and the premise was Stanley visiting Ollie in hospital close to the end of their days - it was very touching.

I watched them as a kid but like David was really brought up on Abbot and Costello. I didn't watch Laurel and Hardy for years - just didn't for some reason. Then I saw one the other night and absolutely fell in love with them all over again. There's something about the simplicity of the writing that appeals to me.