Inside the actors studio - Clint Eastwood 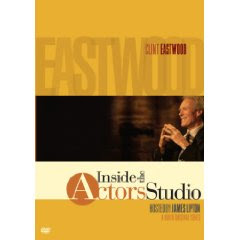 
Hosted by James Lipton this in depth interview with Clint Eastwood was recorded in 2003 at The Geffen Playhouse, one of the few times that the show has gone out of the comfort zone of its own acting school studio.

I've always liked the Actor's studio as it gives an interesting insight into the, often mythical, craft. And the fact that the subject is Clint Eastwood, my favourite living actor, made this a must have item for me.

There are several sections that were cut for time reasons from the broadcast episode and these offer some humorous anecdotes from the legendary actor/director. There's a funny story of how when Clint telephoned Richard Harris to offer him the role of English Bob in The Unforgiven, the actor had been watching a DVD of High Plains Drifter and wouldn't believe it was Eastwood on the telephone.

The conversation covers Clint's entire life - at birth he weighed 11ib 6oz which must have brought tears to his mothers eyes - in search of the man behind the public image. What is especially clear from the conversation is that although it looks as if Clint is often doing nothing on screen, he is in fact a master of his craft.

An essential buy for Eastwood fans and anyone interested in the craft of acting.
Posted by Gary Dobbs/Jack Martin at 10:58