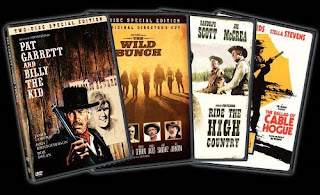 The contents of the DVD box set are identical across all regions, both titles and extra features.

First up is Ride the High Country (1962) - a truly classic western starring Randolph Scott and Joel McCrea as aged cowboys hired to protect a gold shipment. The extra features are headed up by a new featurette entitled A justified Life which looks at Peckinpah and the making of the film. There is also a commentary by Nick Redman, Paul Seydor, Garner Simmons and David Weddie.
Although not th

Pat Garrett and Billy the Kid follows (the film is reviewed elsewhere on the Archive) and it's another classic western. There are two version of the film on the discs - the 2005 special edition with all the extra footage and the Turner 1988 Preview Version which 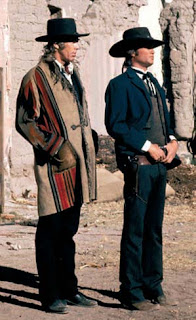 is closer to the original theatrical version. There are a stack of special features including commentaries and several featurettes. 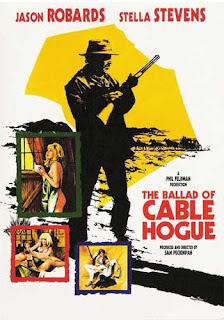 The Wild Bunch gets the lion's share of special features with the Oscar nominated 1996 documentary. A Montage in Blood included as well as two other quite weighty documentaries and a commentary. The cut of the movie here is 139 minutes which is, I think, the longest yet released version of this magnificent movie.

Finally The Ballad of Cable Hogue is a strange gentle comedy western which shares a similar "end of days" theme with The Wild Bunch but a little less blood. Jason Robards plays Cable Hogue who discovers a water hole in the desert and turns it into a stop off point for thirsty travellers. He remains there waiting for two men to show up who robbed him and left him to die in the baking Arizona desert. Stella Stevens supplies a dizzy love interest for the grizzled old Hogue. Again the disc is packed with special features which include a commentary and a great documentary about this little seen, but brilliant, movie.


This is a box set that no western lover will want to be without - each film is excellent and represents Peckinpah's best work in the genre and that's some great work indeed- Peckinpah was, after all, one of the genre's most important visionaries and one of only a few western directors who created masterpieces outside of the genre as well as within its confines.
Posted by Gary Dobbs/Jack Martin at 05:45

Archavist: I just listened to your podcast 3 episode, about The Good, The Bad, And The Ugly, and it was excellent. Tons of great info. I had no idea the film has been re-released for theaters, what, 17 times? Pretty amazing. Very enjoyable show. -- Mykal

Thank you - there'll be another episode up this weekend

I love Eli Wallach - one of the most versatile actors ever.

I saw the Wild Bunch when it was released and found it violent. At the time I lived in Alberta where all movies and reading material were censored. Parts of the movie didn't make sense because of the cuts. I think it's time to find another version and watch it to see what I did miss.