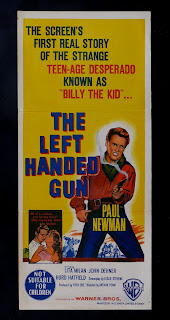 This movie was originally intended for James Dean and would have been the stars only true western had the fatal car crash not robbed the world of Dean's talent. Paul Newman had already taken over Dean's role in another project, Somebody up there Likes me (see previous post) and so he was once again selected to take the lead role.

At this stage in Newman's career he certainly has a lot of both Brando and Dean in his method acting style which interestingly he would tone down as he became more well known and comfortable in his own abilities. There are a couple of scenes where Newman's teenage angst looks ridiculously over the top and melodramatic - at times it seems all the young bandit needs is a clip across the ear to put him on the right track. 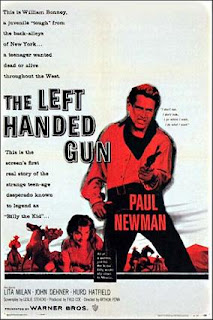 Directed by Arthur Penn, who would later make the western classic, Little Big Man, The Left Handed Gun tells the legend rather than the story of the west's most famous desperado, Billy the Kid. And it is a great western that has grown in stature over time and is these days rightly regarded as an important film in the development of the western.

Newman is for the most part superb and portrays The Kid as an illiterate (in reality The Kid was anything but illiterate as his famous letters to Governor Wallace prove) and psychotic teenager who has to make his own way in an uncaring society.

On its initial release the film turned audiences away - westerns didn't usually concern themselves with social comment - but it stands up well today and is an intelligent and gripping movie that deserves a higher status in the western genre than it currently enjoys.

Violent, gripping and compelling with a mostly great performance from all concerned.

Available as part of the Paul Newman DVD box set from Warner Video (for full contents scroll down to previous post)
Posted by Gary Dobbs/Jack Martin at 01:17

James Dean as Billy The Kid? Not so sure. He was pretty good in Rebel and Giant but I thought he struggled a bit in East Of Eden.
On paper Dean and The Kid sounds like a match made in heaven.
Maybe, it was better that Paul Newman got the role. Pity that James Dean had to die though because, at the time, he represented our generation.

Seeing stars play unlikely roles out of their comfort level can be good or bad. But risk taking is what it's all about. Case in point is Johnny Depp playing John Dillinger in Public Enemies, which I will be seeing Friday.
This Newman boxed set sounds like a winner.