News and those STATS 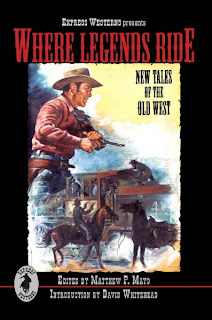 The Archive may be a little quieter than usual for the next few days but that's because I'll be on set filming for the forthcoming third series of the BBC's Lark Rise to Candleford - I enjoy working on this series and there's a great atmosphere between cast and crew. The only downside is the British weather - so fingers crossed the rain holds out.

Jack Martin news - My western short story, The Gimp (thanks to Nik and Charlie for whipping the thing into shape) will appear in the forthcoming second anthology from Express Westerns alongside western fiction from a bunch of other Black Horse Western writers. I'm pleased with this as the first anthology published under the Express Westerns imprint is a rip roaring collection of Old West Tales. The first anthology (pictured) is available to buy HERE or direct from Amazon and all other book retailers. I will post news on the progress of the second anthology as and when it becomes available.

Sticking with my Jack Martin alter ego - I am pleased to announce that a western novella of mine has been taken by the exciting western small press project Six Guns and Shootouts - Editor, Kerby Jackson is bus

y putting the finishing touches to the launch issue but we are looking at a tentative date of publication for early fall - check them out HERE. I hope all readers support this project and snap up the first issue because it is small press projects such as these that will bring new readers into the western fold.


Later this week on THE ARCHIVE we will have an interview with every so busy western writer, Marcu

s Galloway who, as well as writing fiction under his own name, has ghosted a few of those Ralph Compton titles you see on bookshop shelves. Hands up who'se looking forward to this one.


The once influential Richard and Judy Book Club is no more - this is a great pity as the show was responsible for shifting thousands upon thousands of titles. However the many felt the writing was on the wall when the show moved from Channel Four to some obscure satellite station no one seems to have heard of.

Waterstones have announced a fall in sales profits - the figures up to April 2009 saw pofits fall by 38.7% against the same period last year. However managing director, Gerry Johnson remained bullish saying, there is still everything to play for in the book trade.

And lastly but not leastly here are those Archive stats for the past week.

Posted by Gary Dobbs/Jack Martin at 01:01

Where Legends ride is definately worht getting hold of, and Gary, congrats on having your story accepted for the follow-up.

SOunds like lots of good things happening for you and around you right now. Cool and congrats. I'm definitely looking forward to the first antho from Kerby's press.

Congrats Gary and there will be a cowboy joining you from NY in that first anthology collection you mentioned. But more news on that later...

You're leading quite the life: writer, actor, bon vivant.