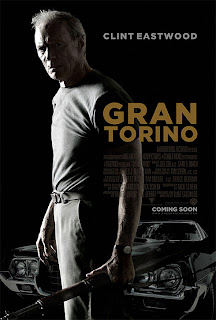 Out this week on DVD - Eastwood still has it. When I went out to buy it the film had already sold out in W. H. Smiths, Borders and Tescos, though Tesco did have a Blue-Ray copy. I ended up getting a copy in ASDA and at £12 it's a bargain.

Watching the film again on DVD is I think a better experience than originally seeing it in the cinema was. For one thing I was better able to appreciate what is, at times, an almost semi-documentary style of film making. And Eastwood is, at 79 when this was filmed, awesome and he commands the screen in a way he has not done since The Unforgiven.

In many ways there are parallels between the movies. Unforgiven was a revisionist masterpiece of the western genre in which Eastwood said goodbye to his drifting loner character which has been deep in the genes of every western role he has played. And with Gran Torino he plays a man that could be an elderly Dirty Harry, a beaten down tough guy, a sad and lonely man who realises he has lived so long that he is literally out of time. And in the same way that William Munny was the natural conclusion of the western Eastwood then Gran Torino does the same thing for "he-man" Eastwood.

Course it's also a reflective meditation on the multi-cultural world we now live in.

If anyone gets offended by the many racist jibes in this movie I would say they are missing the point. Eastwood is superb, the young cast of newcomers work well within the everyday atmosphere of the film and it's brilliant from start to finish. And that shock ending - well I don't want to give anything away for those who have still to see it, but it's explosive.

If there's one weak point - it is that the actor playing The Priest is naff.

The Region 2 DVD contains several special features in the shape of several documentaries but what we really want is a commentary from the big man himself.
Posted by Gary Dobbs/Jack Martin at 05:30

Spot on review! And you're right, the actor playing the priest was a weak link. I think the part was written well, maybe just needed a stronger actor. BTW--I love the term "Naff." Not sure if it's caught on here in the U.S. but I take it to mean "lame" or "crummy." Those are polite ways of saying it?

I really enjoyed the movie. I didn't have a problem with the priest. He was a relatively minor character anyway. I was amazed at the acting by some of the family characters, who I hear had mostly had no experience before the movie.

If you're talking about the Father Janovich character, it was played by Christopher Carley according to imdb.com and has had several minor roles, including a small part on The Sopranos. Perhaps another example of being mis-cast. I haven't seen Gran Torino yet but look forward to renting it soon.

You mention Eastwood's character seemed like a beat down Dirty Harry. While the movie was being filmed, all sorts of rumors floated around about it. One was that it was a Dirty Harry coming out of retirement film.

Get off my lawn!