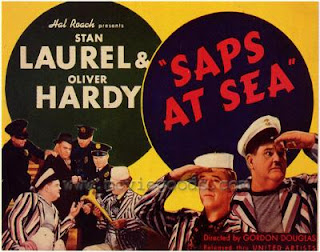 I've seen reviews of this film that don't usually rank it among the duo's masterpieces, but I don't agree with that assessment at all and I found this film in the top flight of L&H slapstick comedies.

The film starts off with Oliver suffering a nervous breakdown at work - the pair work in a horn factory and the constant beeping has driven Ollie over the edge. Following a piece of automobile lunacy where Stan, after getting the horn stuck on bashes the engine with a hammer only for it to fall onto the road. This provokes much mirth from a crowd of onlookers and the attention of a patrolling policeman. Stan simply picks the engine up, tosses it onto the back seats and the car runs as good as new.

bia and a nice sea cruise, and plenty of goat milk is subscribed. Ollie though doesn't fancy going out on the ocean but Stan figures they can rent a boat and remain in the harbour and still get all the sea air they would get out on the deep blue. However when the pair are asleep the goat ears through the mooring rope, sending the boat adrift on the ocean. To add to the matter an escaped killer is stowed away on the boat and is being taken out to sea with our intrepid duo.

aurel and Hardy, arguably the best comedy double act there has ever been. They are certainly the most well known worldwide and over the years there have been many L&H spin offs and the industry built around these two still thrives to this day.

This film is available on the excellent DVD series containing all of the Hal Roach L&H comedies. It is disc number 11 in the set and also contains Below Zero and You're Darn Tooting. The later is one of the duo's best silent comedies and features the famous mass trouser ripping at the climax. The entire set can be bought as a box set of 21 discs. The discs are also available separately which is much more affordable. They are very well priced on Amazon and I recently purchased the final three discs to complete my set for less than £3 each. Each disc has been remastered from the best prints and they are, with very few exceptions, crystal clear.
Posted by Gary Dobbs/Jack Martin at 11:38

Email ThisBlogThis!Share to TwitterShare to FacebookShare to Pinterest
Labels: laurel and hardy, saps at sea

I've always like the duo. As a kid, one of the TV channels use to play their films (silent & talkies) during the mornings of the summer months. Favorites? "The Music Box" "Sons of the Desert" "Block-heads"