Nebraska based Marcus Galloway has the western imprinted deep within his genes - he is currently wowing western fans with his Man from Boot Hill series and he is also responsible for several works published under the Ralph Compton name. The Archive shared a virtual camp fire with the writer and, as expected, all thoughts turned West.

TA: How would you describe your work to new readers?

MG: I would say my westerns are for fans of Clint Eastwood movies. While a lot of traditional elements are present, I lean more toward the grittier end of the spectrum. My heroes tend to be shady, even when they’re doing the right thing. That’s just the way I’ve always written and those are the kinds of stories I like. I try to write characters that are just a bit off center from your typical sher

iff or rancher. I also like outlaws. Even as a kid, I wanted to wear the black hat when playing cowboys and Indians.

TA: So what does the western mean to you?

MG: For me, “western” conjures images of freedom that we don’t have now, such as being able to pack up your bedroll and take off to a new town so the grass doesn’t grow under your feet. It means living freely and dangerously. And it doesn’t necessarily have to be in the 1800’s or even on earth. Star Wars is a perfect example of a western in space. All the classic figures were there. The gunfighter, the bounty hunter, the evil sheriff. The gunfighter rode against the rival gang, shot it out with them and rode away to fight again. A western is a wild, exciting adventure where strong characters are making their way in a tough environment. There’s a hard edge to every element of the story. James Bond may have plenty of shootouts and romance, but when you say “western shootouts and romance” it’s a whole different animal.

TA: Where do you see then genre heading in the future?

MG: At the moment, the genre is going through a rough patch. That’s got nothing to do with the writers in the field, but publishers wanting to stick with safe choices. It’s hard to get anything new going because publishers don’t want to take a risk. There will always be westerns, however, because that brand of storytelling is rooted in so many of us. As with anything else, this genre is cyclical. Pretty soon, after they hear readers demand more quality work, publishers will widen their scope to something beyond the same stuff that’s been out there for 50 years or more. As for the future, my money is on a new trend in the western writing style. It will be something subtle like a shift in dialogue to reflect more modern speech or possibly a shift in setting from New Mexico, Arizona and those sorts of places to settings that you don’t see that often. There’s got to be something to draw a new audience. Something like the dialogue shift may not be historically accurate, but it makes it easier for a new audience to relate to the characters. It doesn’t have to be snarky or anything like that, but just something to shake it up a little. Maybe a shift into something more like the pulp adventure novels would be good. Just something else to add some variety to the western section in a books store. Without variety, the future of any genre isn’t too good.

TA: What advice would you give to hopeful writers?

MG: First and foremost, they should write! Too many times, new writers say they’ve got a great idea but don’t know where to start 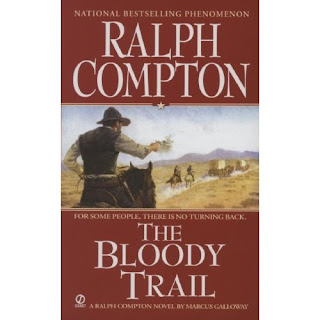 . Or they’ve got a great book they’ll write someday. Step one is to write it. Don’t be afraid of messing up. Don’t be afraid of editing. Start in on it and you’ve set the entire process in motion. Also, write something you would want to read. Don’t try to write for a particular audience, because there will always be people who like or dislike a book. If you write something you enjoy, it shows. If you’re just writing to cash in on a trend, that shows too. Have fun with it and be persistent. Pluck away at it on a schedule. If you want to be a writer, that’s what you’re going to have to do.

TA: So what would be your own writing routine?

MG: I start off with an idea of a character first. I try to think of an interesting person and then flesh him out. As I’m doing that, a storyline comes into focus. Every day, I write anywhere from 12-20 pages no matter what. Usually, I write 2-3 pages and take a little break. Another 2-3 pages and then walk the dog. Keep that up and don’t go to bed until I’ve hit my mark. With editing, I run through the first time by polishing 20 pages a day. If I hit a snag, I’ll edit more the next day so my average comes out to 20 pages per day. The next go-around, I’ll edit 30 pages a day, then 50 a day and then send it in. After that, I’ve got to work with the in-house editors and it all starts over. I need to keep it on a schedule so I can gauge when to start and hit my deadlines.

TA: Tell us a little about your influences.

MG: My mom is my #1 influence. She’s supported me since I first started writing as a little kid. Even when I was typing little stories and coloring pictures to go along with them, she told me I could be a writer. Since she’s had plenty of experience writing her own poetry, short stories and novels, she is still a huge influence beyond just support. Also, my wife is behind me 100%. Bob Randisi is a great friend of mine and he’s taught me a lot about writing and surviving as a full-time professional in this industry.

TA: What future projects can we look forward to?

MG: I’ve got another western series making the rounds to several different publishers. I’m just about to start in on another book in the Ralph Compton series. Those are always fun. I’m writing a horror series under a different name about werewolf hunters. That’s a great example of how westerns have influenced me. I got the idea from buffalo hunters who used every piece of their kill and applied it to werewolves. I wanted it to be more of a western and set in the 1800’s, but shifted it to a modern timeframe. Even so, it has that western sort of feel that I described earlier.

TA: How important in relation to your work is reasearch?

MG: That depends on what sort of project I’m doing. Nick Graves from the Man From Boot Hill series is a gravedigger and Mourner, so I researched that. I also researched vigilante activity throughout Montana. For that series, I wouldn’t have Nick encounter historical figures simply because it wasn’t part of that story. I did have him get involved in a labor riot that actually tore apart an entire town because he was in that area at that time. The Accomplice is totally different. I researched Doc Holliday intensely to make sure he was where he should have been when he should have been there. When he was in Fort Griffin at a particular time and there were accounts of a shooting, I had that shooting take place. I wanted Doc to be Doc Holliday and not just some smart-mouthed gambler. The other character, Caleb, was completely fictional but even he was the sort of person Doc would have worked with. I’m writing entertainment, not textbooks. Any writer should be given some slack to tell their story. Referring to a certain kind of spur may be inaccurate, but usually doesn’t change the story. If you’re referring to the type of spurs a specific person wore, then that’s more important and should be accurate.

TA: You've written a number of titles under the Ralph Compton name. How different is it when writing under a house name?

MG: The big difference is in the style I use. When writing under my own name, I’ll write characters and action that’s a bit grittier or darker than normal. If it’s a series, I know where it’s going and can also change it drastically if I decide to do so. When writing under a house name, I do my best to maintain the same style as that particular brand. Since it’s not my series and I may not do the following book, I can’t do anything that may carry over from one book to another. They’re clean, standalone stories. As much as I like to play in continuing series, standalones are a refreshing change.

TA: Cool choices. OK - Clint versus The Duke, who wins?

MG: You probably already know the answer to this one by now. Clint all the way.

The Archive thanks Marcus for his time. Visit his website HERE

Great interview Gary. I have all of Marcus' books and have enjoyed all those I've read so far...

Yes, an excellent piece, Gary. And, of course, I'm in particular sympathy with Marcus' take on publishers who insist on the "safe choices" approach, be it supposedly to accommodate censorship by allegedly staid librarians (I've yet to meet/be challenged by one) or whatever. The 1950s westerns were fine, but if we just keep recycling them we will appeal only to the nostalgia audience. There has to be an additional element. Marcus' grittier end of the spectrum might be just what is required. It has worked before. The UK Piccadilly Cowboys books were regarded as "gritty" for their times, and as Cullen recently reminded us, the old Gold Medal editors did not believe in imposing "taboos" on their writers the way some publishers are doing just at the moment.

Nice interview. I'll be checking out some of Mr Galloway's work. Thanks for posting this.