Almeria, Spanish location of many of the spaghetti westerns, including the Leone/Eastwood trilogy has been ravaged by fires - The Spanish region of Almeria has been blazing from forest fires for two days and on Thursday firefighters successfully tackled the fires and they are now under control. Approximately 500 people had to evacuate their homes.

Wildfires started in the forests and bushlands and Spanish firefighters requested the help of the army to battle the blazes with three planes and five helicopters. A lightening strike has been announced as the most likely culprit for starting the fires but it has not been officially announced yet. 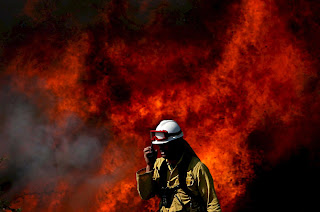 Nearby hotels were inundated with visitors as people had to seek refuge away from the burning flames and although 5000 hectares of land has been affected by the fires, many homes were saved. The worst affected areas are between Turre and Mojacar and the Finca Listonero, a 300 year old former restaurant now villa, has been reported to have suffered badly in the fires.

David Jackson, a local resident in the area wrote on his personal blog on Thursday that things were starting to ‘return to normal’ and the process of clearing up the mess left in the wake of the inferno was about to begin.

Posted by Gary Dobbs/Jack Martin at 00:52