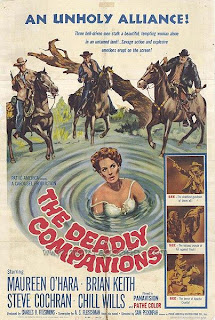 When TV's highly rated show The Westerner was cancelled it's star Brian Keith was offered the starring role in the western, The Deadly Companions. It was the star who suggested Sam Peckinpah for director as they had worked so well together on the TV series.

Maureen O'hara has been cast as the female lead and she was horrified that the producers had indeed signed Peckinpah to direct, but she had no way of getting out of her contract, she was also executive producer, and so she had to grin and bare it. She would complain about the directors drinking and claimed he wasted most of the day in a stupor and then wanted to film a days shooting in a few frantic hours. The rest of the main cast were made up of the excellent Chill Willis as Turk and Steve Cochran as the gunfighter, Billy.

Deadly Companions is a tauht psychological western with a strange plot and a bizarre selection of characters - Yellowlegs (Brian Keith) has spent the last five years searching for the rebel deserter (Chill Willis) who attempted to scalp him while he lay wounded on a battlefield. When he does catch up with him he realises that the man doesn't remember him and so he decides to bide his time. However when Yellowlegs accidentally shoots a kid while returning fire to a gang of bank robbers he is distraught. Yellowlegs, Turk and a young gunslinger called Billy accompany the boys mother (Maureen O'hara) across hostile Apache country to bury the boy in a ghost town alongside his father.

Yellowlegs is a complex character - he won't remove his hat because he carries the scars of his near scalping, his gun arm is ruined because he's carrying a slug around close to his shoulder bone and even though he is falling in love with O'hara he remains focused in killing Turk when the time is right. It's all about redemption at the end of the day and the understated climax is beautifully staged with solid performances from O'hara and Keith.

There are several DVD issues of the film (it is in the public domain because of a mistake when the renewal was passed over) but the Optimum Western Classics issue looks superb with crips clear colours and no blockiness at all in the many dark scenes.

Posted by Gary Dobbs/Jack Martin at 17:34

I have the Gold Medal novel by A. S. Fleischman. Good stuff.

Nice to see a little review of this indeed forgotten film. I am the editor an designer of Maureen O'Hara's official website and in 1993 I interviewed her brother, Charles FitzSimons, producer of the film, in LA and we talked a lot about some of the problems the eccentric Peckinpah caused on the set.

I find the characters in the movie fascinating - even the sound track is unique. I have done a page on the film so if you go to my site http://www.moharamagazine and scroll down to the area the movies I have reviewed with photos, etc. you will find it there.

Junebug - great site. Some lovely pictures that will be of interest to all Archive readers - I urge people to visit your site.
Thanks.

Yes, the original was titled YELLOWLEG. I have the second printing, with the movie title.

I love Maureen O'Hara in anything!

Bill - you won't get any argument from me on that one. They don't make stars like that anymore.