There's comic gold in them there hills...comedy westerns 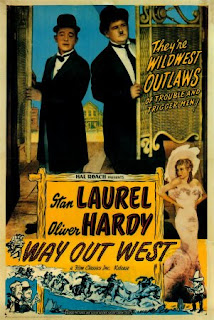 I've been watching a lot of comedy oaters lately and so I thought I'd so a post looking at the funnier side of the West. There are many classics in this particular sub -genre - Blazing Saddles, The Paleface, Support your local Sheriff to name but a few. The Italians threw a few comic oaters into the mix as did the British - Carry on Cowboy anyone!

The West or more specifically The Western, and to hit the nail firmly on the head, the Hollywood Western was always ripe for parody. And it didn't take film makers long to discover the rich vein of comedy gold in the conventions and stereotypes of the genre. 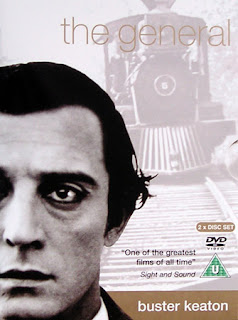 West that nevertheless had the look and feel of the Old West. In Laurel and Hardy's world the west of 1937 was the same as the West of the 1880's. Much the same can be said of Chaplin's Gold Rush (1925) which although not strictly a western it did use many of the genre conventions and Black Larsen was a character that could have come from any of the B-westerns. Both of these films are masterpieces in their own right and can be viewed today with the same enjoyment as when they first hit the screen. There are many high points in both movies. Buster Keaton's signature film, The General (1926) was a Civil War era Western, I can't think of another comedy set during this era, and although the film was both a critical and box office failure upon it's original release it is these days rightly regarded as a classic. 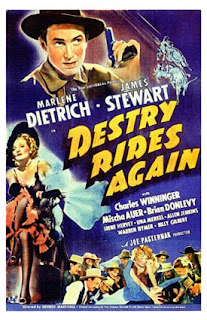 re, 1939's Destry Rides Again was not so much a spoof but a straight western with comic elements. For instance the film plays around with the conventional image of the tough lawman - when James Stewart's Destry arrives in town he is unarmed and carrying a parasol and a canary. When he buys a drink in the saloon he forsakes the old red eye and opts for a nice glass of milk. There were several other straight versions of this Max Brand story filmed but it is this version that has the cult status and rightly so. Stewart and Dietrich set sparks flying off each other and there are too many classic scenes in the movie to detail.

The Paleface (1948) is very much played for laughs - Bob Hope plays a dentist, Painless Potter. There are some great lines in this movie - 'Brave men run in my family', 'It's not the Indians I'm afraid of. It's their attitude.' And the scene with the laughing gas is an absolute comic gem. 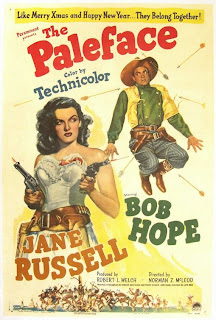 1965's Cat Ballou saw Jane Fonda hiring an Old West gunfighter (Lee Marvin) to protect her after the death of her father. Only problem is that it has been many years since the Marvin character has been any good with a gun and these days he's a shaky old drunk. Marvin actually plays two parts here and he gave the performance of a lifetime and was awarded with an Oscar. Marvin also appeared in another comedy western in 1969, appearing alongside Clint Eastwood in Pain your Wagon, whilst not strictly a comedy has many comedic moments and of course Clint's singing provokes laughter.

The Brit western Carry on Cowboy (1965) is just like all the other Carry On films except it's set in the West. Watching it you get the feeling the veteran British comedy character actors are relishing being in a western. Sid James is the Rumpo Kid. It's a great, if very low brow comedy film. 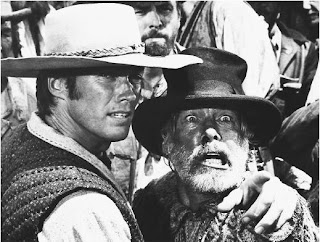 Western icon John Wayne made several westerns that were comedies in all but name with Mclintock (1963) standing out. Many of Wayne's westerns contained comedy moments usually deriving from character moments but with Mclintock the Duke played all out for laughs.

A decade later Blazing Saddles (1974) saw the Wild West given the Mel Brooks treatment and nothing is sacred here as the director tackles every single stereotype of the western and then gleefully invents a few more. The film is full of quotable lines and possible is the only western to feature a scene that shows the results of all those beans the cowboys ate.

There are many more films I've skipped over to get to this period, most of them classics and all worth a view but to cover the entire sub genre would take a book, indeed several books. There are the satirical westerns - Buffalo Bill and the Indians (1976), My Name is Nobody (1973) to name only a couple. The all out satires - Three Amigos (1986) and the Frisco Kid (1979) again only highlighting a couple from what is large selection.

The western has even been merged with comedy via science fiction as in Back to the Future III and of course there has been the post-modern western comedies - a good example is City Slickers which saw old stony face, Jack Palance win an Oscar for his portrayal of a man very much out of time.
Posted by Gary Dobbs/Jack Martin at 05:25

Have you seen "Wild and Woolly" with Douglas Fairbanks? A really terrific silent Western comedy from 1917. Highly recommended.

Cullen - no was unaware of that one - will do my best to track it down. A lot of the silents, being out of copyright, are on the net.

Gary, you should try and track down Hands Up! (1926) starring the long-forgotten Raymond Griffith. A Civil War comedy that many critics and fans consider his very best.

Enjoyed your comments on Way Out West (1937), too. Last year, my sister took me to the Oliver Hardy museum in Harlem, Georgia and when the curator asked if there was any particular L&H feature we wanted to see West got the nod (it's still my favorite).

Where westerns are concerned, I've always considered comedy harder to find on the printed page than on screen. Sure, the Piccadilly Cowboys books ran a nice line in one-liners, and sometimes the gross, but in recent times publisher John Hale, for instance, has tended to frown on writers who attempt humour. He once commented to Gillian Taylor that humour was "an unusual element" in a western. Fortunately, she was not deterred. As another Black Horse Western contributor, I also like to indulge in the odd moment of comedy. With the Misfit Lil stories, which you can sample at geocities.com/chapkeith, the odd moments can become more than a few!

When I was a kid one of the local stations frequently aired the western comedy Texas Across the River which dates from around 1968. Dean Martin and Alain Delon are the stars, but my fondest, most politically incorrect memories are of Joey Bishop as the chief of a band of incredibly incompetent Indians. I remember laughing to the point of tears at their slapstick antics. I wonder what I'd think now.

Another fave of mine, not mentioned in the post is the Trinity series - very comedic westerns.

Another, though not originally intended to be comedic, is Rose Marie with Nelson Eddy.