CHARLEY'S WAR - RETURN TO THE FRONT 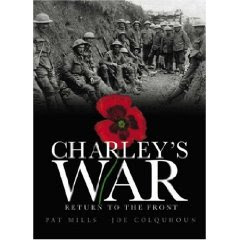 Following on directly from the last volume, Blue's Story which saw some Blighty-side misadventures for Charley as he came to the aid of Blue, a deserter with a story to tell. This volume in the collection of ,what is possibly the best British comic strip of them all, tells of Charley's return to the front.

These are handsome hardcover books with introductions and episode notes added to the strips. They are also respectfully jacketed with black and white war time illustrations with only a poppy in full colour. This gives them a classy feel which is fitting to the quality strips inside by Pat Mills and Joe Colquhoun.

Charley's War was different to all other strips appearing in boy's war comics. For one thing everything was shown as realistically as possible and there were no dumb heroics. Here the characters are fully flushed out and act as real people would in the horrendous situations the brave men who fought in the first world war had to endure. It was also historically accurate with the time line of events in the story following the real conflict. There has never been a comic strip quite like Charley's War and it is doubtful there ever will be again. Charley's War is so good that I make no reservation in stating that this is without doubt comics legend Pat Mills' greatest ever work.

This is the fifth volume in Titan Books series which, I hope, will continue to publish the entire run of strips that were originally published in Battle comic. There's no announcement of when the next volume will be available, as there were in previous volumes, so I hope Titan Books are going to continue with the series in this format.
Posted by Gary Dobbs/Jack Martin at 18:31

No heroics eh? wow, that was kind of avante garde for the time.