Another of the westerns James Stewart made with director, Anthony Mann and once again it's an excellent western even if the happy ending does seem tacked on.

Howard Kemp (Stewart)  is a bounty hunter who's been after killer Ben Vandergroat (Robert Ryan)  for a number of years. Along the way, Kemp is forced to take on a couple of partners, an old prospector named Jesse Tate and a dishonourably discharged Union soldier, Roy Anderson. When they learn that Vandergroat has a $5000 reward on his head, greed starts to take the better of them. Vandergroat takes every advantage of the situation sowing doubt between the two men at every opportunity finally convincing one of them to help him escape. 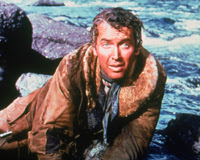 There are great performances all around with Stewart playing the tortured soul to perfection, while Robert Ryan is suitable slimy in the kind of role he could play in his sleep. The screen toughest Mike Hammer, Ralph Meeker is also excellent as a philandering soldier on the run from a band of Indians after spoiling a squaw. Only Millard Mitchell, in the kind of role usually played by actors like Walter Brennan, disappoints but then the script makes his character inconsistent. The way the character is tricked by bad guy Robert Ryan towards the end of the movie spoils what is otherwise a brilliant western. The problem is that we are asked to believe the old man could be tricked so easily by Ryan when the old man has learned enough about the outlaw to know he can't be trusted. This is however a minor quibble in what is another great western for Stewart and director Anthony Mann. I watched the film again, not sure how many times that is now, for this review and I enjoyed it as much as ever. The colour photography really is stunning


Anthony Mann's westerns were grubby and noirish and this one is no exception - Stewart carried psychological scars that run deep and out of the diverse characters in the movie, it is he who is the most haunted. Much is made of that fact that he is a bounty hunter, something he feels ashamed of, and is hunting Ryan for cold hard cash. At the time this movie was made the bounty hunter had been mostly ignored by Hollywood and would not become popular until the Leone/Eastwood westerns of the following decade. In many ways the Mann westerns anticipate the uber-violence of the European westerns and no one could ever play intense the way Stewart could.

Email ThisBlogThis!Share to TwitterShare to FacebookShare to Pinterest
Labels: the naked spur

Another top notch review Gary! I love those James Stewart westerns as well!

Great stuff. This is a real 'noir' western, with a man haunted by his past and it predates the themes of the Nam films in the seventies.