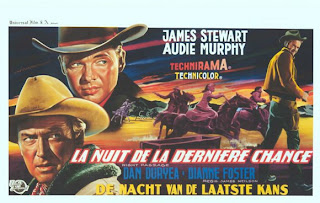 If this feels like one of the Stewart/Anthony Mann westerns that's because it almost was - director, Mann pulled out at the eleventh hour after arguments with Stewart about the casting of Audie Murphy and what, he considered, a weak script. In fact Mann actually started the picture and walked off set very early in the production.

This would have been the sixth western collaboration between Stewart and the director but it was not to be and James Neilsen, then known for his TV work, stepped into the director's chair. And whilst the movie is not up there with the five classics Stewart made with Mann it is still a damn good western movie. And there ain 't nothing wro

ng with Audie Murphy's Utica Kid either. Murphy may never have been the most accomplished actor but he does fine in this role.

Filmed in and around Colarado there is some breathtaking scenery, all expertly photographed. One particular scene where a train snaked around a mountain track reveals a landscape which must be among the finest in the world. These scenes were filmes at the Durango and silverton narrow gauge railway using a K28 class steam locomotive, number 476 which is actually still in use today.


James Stewart plays an accordian slinging troubleshooter for the railroads and the actor performs several songs himself and does a damn good job at it too. It's a mighty fine western and the DVD print available is top notch with crisp clear colours and a suitably booming soundtrack.

At a railroad construction crew outside Junction City, Colorado, Grant McLaine, a former trouble-shooter who was dismissed five years earlier for allowing notorious robber The Utica Kid to escape, earns money by playing his accordion. After his former friend, railroad executive Ben Kimball, asks Grant to come to Junction City to discuss Whitey Harbin, the leader of a gang of outlaws that has been stealing the company payroll, Grant sets out on the trail.

Certain fans claim that this film would have been better had Mann directed but that will always be conjecture and frankly there's nothing wrong with it as it is.
Posted by Gary Dobbs/Jack Martin at 01:56

Another Western to put on the list. Interesting pick for a movie poster, too.

I remembered the title from Stewart's filmography but had never seen it before. Sounds like another winner - I'm a big fan of his. Rarely disappointed.

In the 50s, the popularity of Western films was a magnet for the big stars and Stewart was in many excellent ones. It seemed he had a lead role in a Western film every year during that decade. And not a bad one in the bunch.

although I like Jimmy Stewart, I've never seen a lot of his movies.