THE FALL OF WILD BILL

Over fifty cowboys deterred from attending the Dickinson County Fair by bad weather, drifted into Abilene and proceeded to visit the saloons for a drunken bender. Among them was gambler, Phil Coe.

Marshall Wild Bill Hickok had warned the cowboys about carrying guns in town but the cowboys ignored him. At about 9pm someone fired a shot in the Alamo Saloon and Hickok burst in demanding to know who had fired the shot.

Phil Coe, with his six shooter in hand, claimed he had fired at a stray dog and before Hickok could say anything the gambler pulled another six shooter and fired twice at the Marshall.

The first slug went into the wall while the second tore a hole in Hickok's frock coat. The Marshall coolly drew his own weapon and fired three times. The first two shots took Coe in the stomach (the man would die in agony three days later) but the third bullet struck an armed man who had run between the two men.

At first Hickok wasn't sure who the man was but he was horrified to discover he had shot and killed his friend, Mike Williams. Hickok was openly crying as he carried his dead friend and laid him on the billiard table.

The gunfight turned out to be Hickok' last. On December 13th, with the cattle season over, the town council dismissed Hickok and his deputies Hickok never wore a badge again - it is unknown if his shame at killing his friend led to him turning his back on lawman work or if he was just being prudent because of failing eyesight and a desire to be married. One thing that is certain is that James Butler Hickok was a changed man after the shoot out at the Alamo saloon. 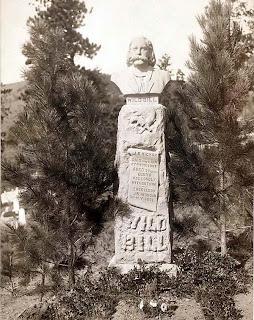 On August 12th 1876 a drifter by the name of Jack McCall walked into Deadwood's Saloon No. 10 and shot Bill in the back of the head while he was playing poker. He had been holding aces and eights which has become known as, The Dead Man's Hand.

Nice and succinct retelling of the story. Good material. Man, where did you find the time to post like 30 blog posts!

Charles - I want to get forty done today to give a fighting chance of 100 by midnight sunday.