Parnham. His current oater, Riders of the Barren Plains is published this July and will be the eighteenth book the author has seen into print with the popular western publisher.

So what is it about the western that attracts Ian:

"They're short. My preferred reading in any genre is for no-nonsense tales that set things up, tell a story, and reach a definite ending, and ideally within 200 pages. Sadly the tendency is for most genres to get longer and longer, but not necessarily to add anything. For the most part the western tale has resisted this temptation."


As we've mentioned, Riders of the Barren Plains is out July. Tell us about it. 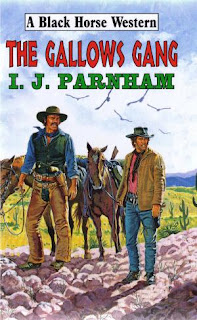 "Can I say no? Whenever I think about stuff I've written I usually groan and wish I could rewrite. Riders of the Barren Plains makes me groan slightly more than most. It started well with a good title, but the story didn't quite turn out the way I'd hoped in that the plains weren't all that barren and the riders didn’t do much riding.

It's a tale of redemption concerning a decent man who ends up on the wrong side of the law. People die. He tries to put things right, but he gets deeper and deeper into trouble until there's no way out, except one… Thinking back I'm dissatisfied as I set up the central character's complex dilemma quickly, but perhaps I did it too quickly. As I said above I like shortness, but maybe this time I was too fast-paced. So if anyone who hasn't read me before is thinking of trying one of my books I'd recommend waiting for Sharpshooter McClure, which is out in six months. I've yet to find a reason not to like that one."

So who influences Ian? 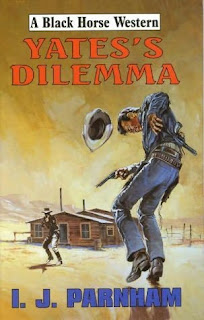 "To be honest I don’t know. I admire Alfred Bester for his vivid style, Meryvn Peake for his imagination, Stanislaw Lem for his ideas, George RR Martin for his characters… I could go on, but frankly it's not worth it as I don’t try to write like the authors I like to read, not that I could. I aim for a no-nonsense neutral style, but who that style is like I don’t know."

What does Ian find essential in telling a good western? What ingredients are needed?

"I want a quick set-up. I want to know where the story is going quickly. I want a hero who I can become for a while. I want colourful secondary characters. I want to be surprised with a plot twist that rocks me back on my heel

s and makes me question everything that's gone before. I want an impossible dilemma in which the hero is doomed no matter what he does. And I want a resolution that brings the story together and doesn’t just depend on who can draw fastest." 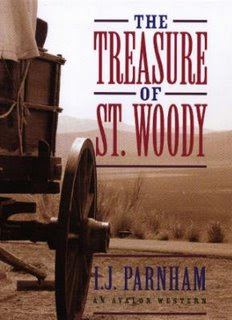 "I have an Avalon Western out in August called The Treasure of St Woody.

I also still like that one. It uses a story idea I'd had in mind for years in which a dime novelist tracks down the real-life inspiration behind a legendary fictional lawman. He plans to write about his life but finds that reality is nothing like the fiction. And anybody who has read the previous book in the series will be pleased to know that Fergal O'Brien finally

The western has a literary genre seems to be on a roll at the moment with more and more readers returning to the genre. Where does Ian see the future going?

"Sometime soon I think the genre will be rediscovered. What will cause that I don't know, but I think it'll be something that'll annoy the traditionalists and send it off in a bizarre new direction. You see it with many genres that the books that are getting attention fuse genres, horror and sf, mystery and fantasy, romance and time-travel. So maybe somebody soon will get a major publisher to accept a fusion of western and something else and the genre will explode."

One of Ian's best characters is the brutal Jake Devine - Devine's Law (2004) pleased readers but set them, myself included, eager for more of this brutal killing machine. Will he return?

"I had a great and original story idea for Devine and which really excited me. I was all set to go. Then last week I made the mistake of watching an appalling western film staring Frank Sinatra and Dean Martin. And that flaming film had stolen my plot idea 40 years before I had it! I hate it when that happens so I'm having a bit of a rethink."

The fact that the character is so brutal may have something to do with his popularity. After all we all love a bastard.

"For me I always secretly root for the bad man and often wish they could somehow survive. They can't of course, but seeing someone being unconstrained by the need to do the right thing is fun." 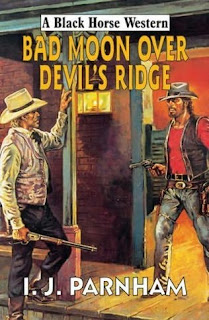 To end I wonder what would be Ian's desert island western?

"Film would either be Once Upon a Time in the West or The Searchers. The book would have to be The Tarnished Star by… M. Duggan (sorry, Gary!). She's my favourite BHW author. Her stories never fail to raise a smile with her original plots and vivid characters."