Speaking of westerns, Elvis Presley made some dire movies but thankfully his westerns, all three of them, are amongst his better film work. And each of them offered him a chance for some straight acting.

First was Love Me Tender (1956) which starred the magnificent looking young Elvis and during this period Elvis was still aiming to become something of a James Dean(his idol) figure. And although this is his first movie and his acting displays all the signs of a beginner he does take things seriously and turns in a adequate performance.

The film was originally titled, The Fighting Reno Brothers but with the casting of the new teen sensation it was decided to change the title of the movie to allow Elvis to release the soundtrack songs.

When the film was released Time Magazine famously called Elvis both a sausage and a goldfish while the Hollywood Promoter said he was an obscene child. The film did massive business at the box office and fans screamed when the Elvis character died at the end but soon perked up when his ghost was brought bac 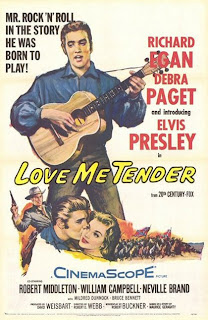 k to sing the title track over the end credits.

Elvis' second western, Flaming Star (1960) came at a time that the singer/actor most needed it. A good director in Don Siegal, an intelligent screenplay, only the one song plus the title track. The result was perhaps his best acting performance and a movie that is arguably his all time best. Only King Creole comes close in any case.

Elvis turns in a fine performance in a role originally written for Brando. The King plays Peter, a half-breed Kiowa. Director Siegal was initially horrified with the casting of the rock and roll star but he soon changed his mind. The scene in which Elvis declares his love for a stunned Barbara Edan is absolutely pitch perfect.

The resulting movie is more 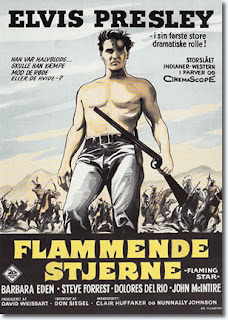 western than Elvis Presley movie and is as good as many of the oaters made at the time.

Charro (1969) was the last western Elvis would ever make. It was a dream role for him - a totally music free movie with Elvis only being called upon to sign the title track.

Elvis was at home in the dusty clothes and thick beard and he was hoping that the movie, boasting a Italian western feel to it, would be taken as seriously as the Clint Eastwood westerns which were all the rage at the time. 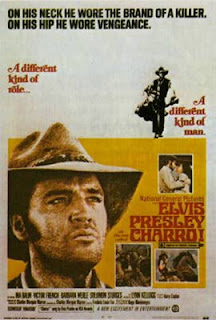 The problem is that the movie came out disjointed and at parts Elvis seems to be sleepwalking. Still it's a decent enough minor western which is at least watchable and doesn't feature any scuba diving, speedway driving, singers.

In many way Elvis' movies mirror his signing - one wonders what could have been if better material had come along. And the story of Elvis Presley is one of the saddest in American show - business.
at January 30, 2010