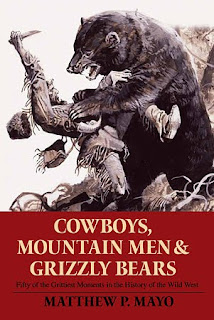 1 - You write westerns both fiction and non fiction - how does each discipline differ?
Let's see, they're both a load of fun to work on, but for different reasons. Overall, I've found that fiction is easier. The non-fiction I've been writing requires more research than my average fiction project. In addition to the writing, there are more moving parts to keep track of and write (finding and procuring photos and illustrations, getting releases signed and sent back, writing the introductions, bibliography, index, credits, captions, etc.).
2 - How long have you had your interest in westerns? How did it initially develop?
I've been interested in Westerns ever since I was a kid. My father and mother both enjoyed watching them--movies and TV--and it rubbed off on me. It was only later that I dove headfirst into studying the history that is the root of it all. The Old West was a fascinating time and place, to be sure. Markedly different than how most Westerns portray it, but still impressive--and that's an understatement. I learned so much when writing my recently released book, "Cowboys, Mountain Men & Grizzly Bears: Fifty of the Grittiest Moments in the History of the Wild West."
3- What can readers new to your work expect to find?
Readers just finding me will, I hope, be treated to solid action and intrigue and characters they can't forget, be they of my own imagination or historic characters I've had the opportunity to write a narrative about.
4- The western has been on something of a revival in recent years. Where do you see the future of the genre going?
I don't think the Western novel's been on a revival so much as it has been holding steady--blips from other markets (films, TV) always help to give it a boost and keep it rolling. And the fan base still seems to be strong. A good story will sell, regardless of the setting. But getting an increasingly lazy society to read is the trick, I think.
Western movies are doing their usual up-and-down thing in Hollywood. We've seen some good ones in the past few years and I'm sure we'll see more soon (if the press is correct and their funding holds!). Then the goobers in charge in Hollywood will say, "Golly gee, must be something to these Westerns. Viewers seem to like them." Then, regardless of public opinion, they'll churn out more exploding car flicks with no plot and complain because they went overbudget.
Having worked in movies, TV, commercials, music videos, I know a bit about the industry, and it's largely run by people who should have been locked away as children. Or maybe they were, and they escaped and gave us dreck like reality TV....
5- Tell us a little about the way you work - do you write a set amount each day, have a target to reach?
My writing workload has increased in the last couple of years, so I tend to write at least six days a week, for as many hours a day as it takes, though usually no less than eight. For fiction, I shoot for 3,000 to 5,000 words a day, and I tend to go from beginning to end before I edit any of it.
At present I'm working on a couple of non-fiction books, shopping three novels, writing a few short stories for anthos, and I write book reviews for three magazines, and newsy bits and features for another. So how I divvy up the hours in a day varies, depending on the next deadline. I'm hoping to sugar down my work to writing just books and short stories. We'll see....
6-What advice would you give aspiring writers?
I guess my advice is the same that I've found useful from other writers: Write a lot, read a lot, and send your work out out out. It ain't precious, it's words. Do your best, then get rid of it and do better. Then send it to any and all markets. Don't be choosy at first, rack up the credits, and keep an eye on where you want to go, try to take on work that will get you to that next level. And try work that you feel might be a little beyond your abilities. You'll be surprised at what you can do with a little fire (and financial pressure) under your hinder!
7 - How often is your website updated. Is this the place to go for readers to learn more about your books?
My Website is in the 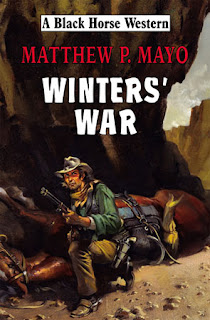 midst of a makeover. New hairdo, flashy duds, some essence of puma (for the ladies), and a set of swingin' chains. I'm working on marketing my latest book, "Cowboys, Mountain Men & Grizzly Bears," and will be doing the Facebook thing, perhaps a blog (if I can think of something exciting to write about), podcast interviews, chimp dancing--whatever it takes. I'm huckster enough to have fun doing it.
But yes, my site, www.matthewmayo.com, is the one-stop shop at which folks can find out more than they want to know about me. Plus I have one of those snazzy Amazon Authors pages. Books are my meat-and-spuds work now, so I have to make darn sure I can attract readers, give them whatever they might be curious about (within reason), and answer questions they might have of me.
We're on the cusp of an interesting time in publishing and I look forward to participating in the industry changes over the next few years.
8-And you are very active in the BHW forum - does the fact that there is this community between BHW writers help you at all in writing your own books?
The BHW forum is a place I visit a couple of times a day. Even though I've not met anyone face-to-face from the group, I feel as though I know 'em all. It's a grand group and I count myself most fortunate to have wandered on in a few years ago. The advice, freely given, and encouragement I found there certainly helped me get to where I am today, making my living (such as it is!) solely from my writing, and for that I'm grateful. Here's an e-beer to the BHW Gang!
9-Tell us about any future projects.
Future projects include the just-turned-in non-fiction book: "Bootleggers, Lobstermen, and Lumberjacks: Fifty of the Grittiest Moments in the History of Hardscrabble New England (1620-1950)"--due out via Globe Pequot Press in the fall of 2010. I have a contemporary comic adventure series an agent is interested in, a Western novel that's with a publisher as we speak, a noiry crime novel with another publisher, a short story (a Western) in a DAW Books anthology about time travel (the antho's called "Timeshares" and it's due out on March 2. It's up for preorder at Amazon.). Plus another Western short story in a steampunk-themed DAW Books antho that comes out next year. I'm also working with my wife, Jennifer—a fantastic photographer—on a coffee-table book about the state of Maine. That's out through Globe Pequot Press in 2011. And I have several proposals for new non-fiction books in the wings. And a young adult novel that's about half-written. Phew.
10 - Finally - desert island western - film and book:
For the flick, today I'll say "Will Penny" with Charlton Heston. One of the best Westerns ever made. And if someone wants to argue about it, they can come to my desert island and I'll mix it up with them in a bout of manly fisticuffs, then I'll steal their speedboat. But not before I watch "Seven Men from Now" with Randolph Scott and Lee Marvin, and "Open Range" with Costner and Duvall. And "You Know My Name" with Sam Elliott.
The book will be "The Canyon" by Jack Schaefer--in vibe, anyway, it's sort of Siddhartha-does-the-Great Plains. A lovely book I like to reread every year or so.
Thanks for the invite, Gary. It's been fun. Happy Trails!
Visit Matt HERE
at January 29, 2010

As an exceedingly indolent writer, I stand in awe of men like Matthew P.Mayo and James Reasoner who have the work ethic and self-discipline to work at least eight hours a day.
Three, four hours and I'm done and heed the siren call of Jim Beam.
Your are a gifted Western novelist, Mr. Mayo - keep up the good work.
Joe West

Mr. West,
As a longtime fan of your writing, I'm humbled by your kind remarks. And now I'll head downstairs for two fingers of Islay single malt and toast you.