It gives us common ground and we chatted a lot after our novels had been accepted - wondering what date they would be published? What cover artwork they would use? And conversing for hours on subjects that would be boring to anyone other than other writers.

I was honoured when Joanne sent me a copy of the early manuscript to read. Though I wasn't surprised that I liked it, since Joanne talked passionately about the book and its subjects.

Joanne writes under the name Terry James, which is a nod to her husband, Terry, and her book is called Long Shadows. It's now available for immediate order with Amazon and other online retailers. The book can also be ordered directly from Robert Hale Ltd.

The book starts with Ros West riding into town late one night and promptly selling her horse at a giveaway price. She's dressed in dusty range clothes and passes for a man as she walks through town. She comes across a man being beaten and hides away in the shadows but as she watches she realises that the men doing the beating are likely to kill the man if she doesn't intervene. Thus she widely sets off her six shooter, chasing the men off. She helps the man to his feet - he is tall, handsome and he seems to recognise her.

Ros however has no recollection of this man called Jake Rudd but there is obviously some history between them. And soon she finds herself helping the mysterious Jake Rudd as they go up against everything the murderous Swain can throw at them.


I asked Joanne how a lovely girlie came to be writing about such a macho male dominated world?


"I’ve always enjoyed watching and reading westerns. It started with the series Alias Smith and Jones in the early 70s and progress 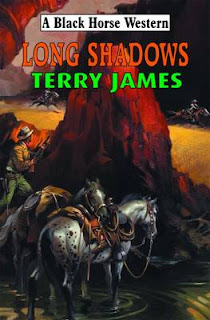 ed to Louis L’Amour books in the 80s. When I discovered I enjoyed writing and that people enjoyed listening to and reading my stories, I just found my niche with westerns. I think I like how far they are removed from my own existence."


Well Joanne's certainly managed to deliver a hard hitting action packed western with a strong hint of romance between the two main characters. I asked her about her writing routine?

"I don’t have a routine but I 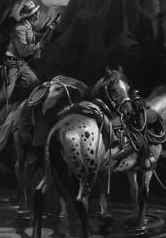 enjoy putting words on paper for an hour first thing in the morning before I step into the real world. I tend to spend a lot of time thinking about who says what, how I can make the characters lives difficult and the locations for particular scenes e.g. barroom, street, cemetery. When I have a scene in mind, I research it on the Internet and in books to make sure I get the details right e.g. what type of doors and windows would a building have had or how might it have been positioned in relation to its neighbours. As long as I have a start, an end and some key scenes in mind I just get down to writing. I then produce about five chapters to get the feel for the story and go back and edit what I’ve done to allow for changes that have occurred to me such as additional twists or characters, or removing bits that just don’t work. When I’m happy with that, I crack on with the rest. It’s probably not the best method if you’re in a rush to finish, but it works for me."

As I read Long Shadows I was hoping for the two likeable characters of Ros and Jake to get it together. The romantic element is worked into the plot in such a way that it doesn't interfere with the action that western readers expect. Indeed it enhances the book a great deal. So how would Joanne describe Long Shadows?

"It’s been said that I’m cruel to my characters because I never give them time to recover from one crisis before I throw them into another. Basically, I like action and emotion in my stories. I like them to move forward at a good pace. That’s why you won’t find any padding, no throwaway scenes or dialogue. Whatever happens on those pages has a purpose and as a reader you need to be on your toes."

So what would be a desert island western for Joanne?

"The book is easy. To Tame A Land by Louis L’Amour. It’s the book I’d like to have written and always strive to write. The film is a bit more tricky. Do I choose a John Wayne favourite and keep myself amused with quirky characters, or do I go for something more dramatic to remind myself there are people out there worse off than me? Tricky. However, the film that sprung to mind was Shenandoah (Civil War not Western but the principles are the same). It has strong characters who are put through the wringer time and again, strong values and a satisfying ending."

And finally what has other projects has Joanne got on the boil?

"Nothing planned at the moment. Writing is just a hobby and there are so many to choose from and only so many hours in the day. I’ll pick it up again when the mood strikes me."

Well after reading Long Shadows there's no doubt that readers will be hoping the mood strikes soon.

Just when I go low key, you plunge me back into the fray. ;-) Happy to contribute to your 100+ posts though. It doesn't look like you'll be struggling to hit the milestone.