Atlas of the American West reviewed by Charles Whipple 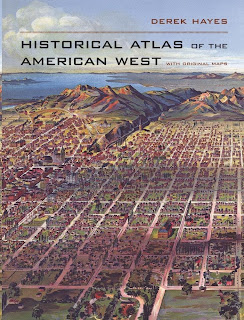 Historical Atlas of the American West

I just bought this reference book, and I got a lot more than I bargained for. I thought I was getting a book of old maps and explanations of them, and to a degree, I was right. But the scope of this big book (larger than the ordinary coffee table book) goes far beyond what I expected.

The atlas is 288 pages of maps and drawings, along with text that explains them all. It begins with the earliest maps of the American West, which it wasn’t at the time. The story begins with the “Native West,” and traces what remains we have of the people who lived in the American West long before it became “the West.” The major groups of Native Americans are mapped out. Taking my native Arizona, I see there were four linguistic groups of natives there in pre-West times: Yuman, Piman, Athapascan, and Shoshonean (in the northwest corner of the state).

The section labelled “A West before the West” contains maps from the imaginations of Europeans: Spanish, Portuguese, Dutch, English, and more. Then comes the Seven Cities of Gold, which contains the Spanish explorations of the West with maps from Coronado, Cortez, and others of that era.

The book then chronicles all the European nations that explored the West. France, Spain, Britain, Russia – the explorers and the seafarers.

Maps from the opening of the West, tracing the Lewis and Clark expedition, the Louisiana Purchase, the mountain men, the Mexican West, Texas as a republic, Oregon, and finally, the whole West as “American.” These maps can provide an important sense of place when writing about the West.

Of course the major trails west are well covered. The Oregon Trail, the Mormon Trek, the California gold rush, silver in Nevada (Comstock), the lure of gold and silver in the West, and the effect of the Civil War. All explained with maps to illustrate.

Linking East and West, and the West Coast with the interior get due coverage. Maps of stage lines, Pony Express routes, railway survey parties, and the building of a transcontinental railway. Here again, a mother lode of information and visual feasting for the Western writer.

The railroads then get their spot in the limelight as the forces that opened up the West. The Kansas Pacific. The Oregon Short Line. Southern lines. Additional transcontinentals. The life’s blood of Western commerce.

The unequal fight between the encroaching foreigners and the fragile natives rates ten pages. This book is not a political treatise, it is a historical atlas. Maps of well-known battles and massacres give dimension to history.

The twenty pages that chronicle the “urban” West give us perspectives of interesting towns and cities. San Francisco in 1873. Oakland, California, in the 1870s. San Jose in 1875. The Great San Francisco fire of 1906. Los Angeles in 1849 and 1887. And many more California cities.

More bird’s eye view drawings include Colorado Springs (then Colorado City) in 1887 and Abilene, Kansas, in 1895.

All of these bird’s eye maps help us to gain a better idea of what towns and cities were like in the period of the West we are most interested in.

From this point on, the book heads toward the modern era, showing the selling of the west, the further opening of the west with highways, the Great Depression, the big water projects that turned the West into an agricultural wonderland, and finally wars and postwar developments.

The book is not cheap, but I would heartily recommend it to anyone who writes about this part of the United States.

Thanks, Charlie. This sounds like a must have on the shelf book for any serious western writer, a good substitute for those who can't get to the USA to do onground research.