A GUNFIGHT TOO MANY
CHAP O'KEEFE
BLACK HORSE WESTERNS
£12.25


Sheriff Sam Hammond is nearing fifty and starting to feel tired of wearing a gun and considers retirement. However his plans are ruined when Loraine Delrose turns up in his office demanding he do something about a team of rustlers that have been working her ranch. Sam is taken with the woman, a one time opera singer now ranch owner, and realises that he has little choice than to investigate the rustling.

Leaving his deputy, Clint Freeman, in charge he goes off to keep an eye on the ranch but trouble isn't far away and by the end of the first couple of chapters the bullets have started to fly and both Sam and his deputy are left injured.

Further problems come when it turns out the man who shot and injured Clint is a vicious bounty hunter, or as he likes to call himself a detective, who is in town looking for the bandit the press have dubbed Dick Slick.


"In 1873 the Supreme Court had defined the rights
of bounty hunters as agents of bail bondsmen, authorized
to deliver up miscreants who’d skipped. They
could pursue the subject into another state or territory
and enforce the original imprisonment. They
could arrest the wanted man on the Sabbath. If
necessary, they had the right to break and enter a
house."


Soon the Sheriff finds problems heaped upon deadly problem and the author keeps the reader both puzzled and thrilled until the final shocking denouncement.


With the western virtually invisible in the book shops it is good that high quality writing is still being produced. Chap O'Keefe is a western veteran and he delivers the goods here in this all action western. The prose is straight to the point with little preamble and the brevity of these novels make a refreshing change from all the bloated tomes in the bookshops. (Surely not every book needs to be the size of a house brick?)With a novel of this size it takes skilful plotting and deft character control - O'Keefe is a master of both.

Chap O'keefe is a writer with a large body of western fiction behind him. His full list of novels are:

Q - As a writer of so many westerns what do you think makes the perfect western?

A-"Perfect westerns" today -- if there are such things -- provide everything that's expected by the genre's dedicated readers, then supply something extra, either by way of content or treatment. The extra element must confound the detractors who wrongly assume even the best western writer is incapable of movi 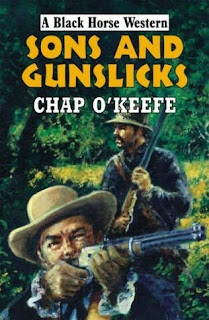 Q- What advise would you give people wanting to write for a living?

A- Sit yourself firmly down at the keyboard and work and work. Your main enemy isn't a "stupid" publisher or a "rival" writer -- it's "real life" and the poor monetary rewards from fiction which make the distractions hard to keep at bay. No one else pays your bills, feeds you and family, looks after your responsibilities, while you're at the keyboard. If the decks are far from clear, put the ambition on hold.


Q - How much of your books are planned out before actually writing?

A- A hell of a lot. I explained this in the course of the Plot or Not debate (www.blackhorsewesterns.com/bhe10 ). I also said why, for me, it's necessary. It boils down to circumstances and past history going back to the early '60s. I wouldn't say there aren't better ways. Today I've completed my twenty-second novel aimed at the BHW market, and it's also the sixth Misfit Lil story. Lil is going great guns, but the writing of this book, for one reason or another, has taken longer than ever. Although my acceptance score with Hale so far is 21 out of 21, I find myself having to adjust scenes ever more frequently for an allegedly timorous library market (see www.blackhorsewesterns.com/bhe11 ) 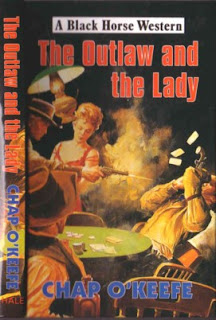 A- A heap of what might have been "favourites" when I was younger haven't survived, or at least haven't been resurrected on DVD. And only memories of bits and pieces occasionally surface. Out of the recognized classics, I still have time for High Noon. I can't claim to have been a lifelong fan of the genre -- movies or books. I don't care for John Wayne across the board, but like Stagecoach, Rio Bravo and a few others. I've watched Clint Eastwood's Unforgiven more than once. Recently, I enjoyed TV's Broken Trail movie and was fascinated to hear Stephen Foster's Beautiful Dreamer in it, because I'd put that song, quoting several verses, in my next Dillard novel, Blast to Oblivion.

Before I began writing the O'Keefe books in 1992, I wouldn't have qualified as a western follower. My interest ran first to crime and detective stories and films, then horror, fantasy and science fiction. When writing comic-book scripts and short stories early in my career, I covered the field: young children's (like Mickey Mouse for a Scandinavian publisher), sport, detective (the Saint), romantic "confessions" (Loving magazine), ghost (Charlton Comics group), war and westerns. Probably others I've forgotten.

Q-Favourite western novel and or writer?

A-I have a list of favourites but I usually avoid mentioning the living ones for fear of offending anyone not on it! Of the older writers, preferences run to Lewis B. Patten and Les Savage Jr, plus some relative unknowns in the field, like John Hunter who wrote the Lannagan stories for the '50s British Amalgamated Press Western Library, a text series that also reprinted the likes of Ernest Haycox, who is another old favourite.

Q-What are your thoughts on the current state of the genre?

A-I just hate even thinking about the current state of the genre! That says it all really. Some fine talents are doing their very best, but publishers' marketing people come back time and again with the dispiriting report that the public doesn't want to know. I'm not sure this is true, but what can we do about it? I spend many hours running the online Black Horse Extra, simply because hard-pressed publishers just don't seem to have a budget for any western promotion whatsoever. That or they've chosen to throw in the towel.

Q-Finally, as a writer, what is it that draws you to the genre?

It has resolved into the challenge. Genre fiction had always appealed from a very young age. When I gave up full-time journalism work, I looked around for markets. At the time, there wasn't a lot left in the shape of thriving, recognizable and established series, other than Mills & Boon in romance. I finally picked on the Australian Cleveland Publishing Company, whose pocket westerns had been circulating in what was now my part of the world since I'd arrived in it in 1967. They had a full inventory of stories waiting to be published, so I eventually sent off my first effort in '92 to Hale in London. They snapped it up, asking only for a change of title. Thus I renamed Lawless Valley (a dreadful title, which Hale said they'd already used) as Gunsmoke Night . . . and the rest is history.
at January 29, 2010