TRUE GRIT - BACK IN THE SADDLE WITH JACK GILES

Western writers put their characters through the mangle, make sure they face ever more dangerous obstacles, risk life and limb many times before the thrilling denouncement when the story winds itself up nicely. But for Jack Giles, pen name of Ray Foster, a writer with the excellent Black Horse Western range from Robert Hale LTD, his personal battles were every bit as inspiring as the best western story.


In 1999 Ray suffered a stroke - nothing major, he told Writers Forum magazine, but it had left me weakened down my left side. Worse was the memory loss and short concentration span.

Typical modesty from the writer - the stroke had actually left him thinking it was 1969 and yet all around him were strange objects - CD players, computers, huge colour televisions. The fact that he also had six children and thirteen grandchildren must have been quite an eye opener. 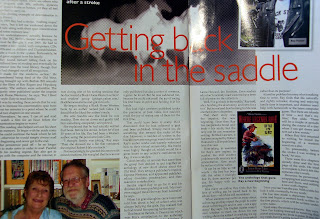 During the recovery process Ray took to reading to pass the time and one day got the shock of his life. He was reading a western novel when Sandra, his wife, told him that he himself had written it.

He couldn't believe it and had to be shown a file of his old contracts. In fact Ray had written several westerns under his pen name of Jack Giles. All had been published under Robert Hale LTD's Black Horse Western imprint.

Imagine it - he's only just getting used to the fact that the CD player is not an electronic toaster and he finds out he is a successful western writer. The discovery brought Ray mixed emotions - much joy but equal sadness that he couldn't remember having written the books. 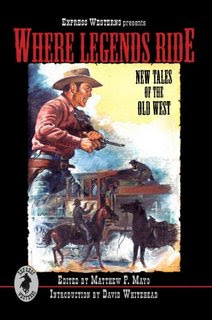 Still can't to this day.

However Ray saw the positives in this - I could read my old books as a reader.

Showing grit, that Rooster J. Cogburn would have been proud of Ray started writing again. His concentration span was limited and he had to make copious notes as he went along, to refresh himself after each writing session. He did a short story first, A Time to Live which was published in the highly regarded western anthology, Where Legends Ride.

Next came a novel - an arduous task as Ray found he could only work in short bursts before his concentration wandered but by writing for several short bursts each day he found he was able to produce a reasonable number of words. That novel LAWMAN was published by Robert Hale earlier this year and it's another excellent adventure from Jack Giles.

Q - What do you think makes up the perfect western?


A-A good to strong plot line that is well constructed and written. Also, it needs characters that can be believed in. Though there are books that do not have all the components and times when belief has to be put on hold because the sheer weight of the characters and the story telling carries the book.


Q- When your write how much do you plan before hand?

A - Good question. I'm a reader

who writes so I never have an ending in mind. A story just starts and the characters move in their own way. The opening to 'Lawmen' is exactly as written with the dialogue taking place between my wife and myself. I wrote it onto the PC and the story began to form. As possible ideas form I make a note of them - sometimes they get used; sometimes not. At school the teacher would write something like 'The guard blew his whistle...' and we would have to continue the story. Or he would ask us to write a composition that included a line. I guess that nothing has changed when it comes to writing.

advise would you give to would be writers?

A- It is one of those things that no one else can do for you. I forget who did this but a well known author once said, when addressing a bunch of students, 'Who wants to be a writer?' A number of hands went up and the author asked 'Then what are you doing here?' That has rather stuck with me down the years. The best instruction manuals for learning how to write come from the books and authors that you admire.

A- 'The Magnificent Seven'. It has a lot of depth to it and the dialogue is something else.

A -Well, the bio says Louis L'Amour and George G. Gilman. But looking back I would have to add Frank C.Robertson and his book 'Horn Silver'. When I re-read it I realised that this book had real people in them - that there is good and bad in all of the characters.

Q- Given the current state of the western genre where do you see things going in the future?


A- As long as writers continue to write the genre will grow.Everything runs in cycles and the 'wheel of fortune' will bring the western back into favour.

A -There are two books on the PC at this time. One is being written in the first person as it deals with a man with memory loss and I found it difficult to do in third person. Using the first person in this instance works because nothing is revealed until the hero lets the reader know it. The other - I'm keeping under wraps - it began as a short story for short lived Great Western Fiction magazine and evolved from there.

Q -finally what is it you feel that your own books offer to the prospective western reader?

A - How do I answer this? Having a distinct advantage of never recalling that I wrote the books in the first place -it is easy to look at them from a reader's point of view. Four books stand out - 'Poseidon Smith:Vengeance Is Mine'; 'Rebel Run'; 'Coalmine' and 'The Fourth Horseman'. They are all different and were, to me, page turners.I would hope that anyone reading my books would feel that they had read a decent book with a good story. Also, I hope that someone would been encouraged to write.


Q - Reading books you'd written and feeling essentially like a reader must have been strange. What was this like?

A-Yes, it is a weird experience reading books that I wrote before my stroke. I think that the biggest shock came with 'Rebel Run' as there is a lot of American Civil War history in it. The Regiments mentioned were real Regiments - and the ending takes place during a real battle. It was the sheer depth of research that amazed me. If have a favourite then that book has to be in the running After reading that and Poseidon Smith I could understand why I would collect the Jack Giles books.

They were an easy read and I got involved with the characters.Jack Giles was not an easy act to follow so 'Lawmen' may be a different style. In fact the original draft was written under a different name - because I was in two minds about continuing with the Jack Giles name. That author, I felt, belonged in the past and this book was a new start for me. However, my wife Sandy, was there all through the writing and she read the final draft - her verdict was that I should offer it up as the work of Jack Giles.So it was with some trepidation that I sent it off to Robert Hale. To be honest I expected rejection but when it was accepted and I held that letter that welcomed back Jack Giles - well, I guess I must have learned something from those books.
And so Ray continues to explore the dream scape of the west.


The western genre has been pronounced dead more times that Sinatra had comebacks but it still refuses to roll over and give up the ghost. And no wonder when film makers and writers continue to explore the genre.

The Black Horse stable of dedicated writers continue to offer good quality, exciting stories set in the American West. Visit the Robert Hale website for details of their western range. Titles can also be bought in all good book stores or from online retailers such as amazon.

The Lawman by Jack Giles is available from all good retailers and Amazon.
Posted by Gary Dobbs/Jack Martin at 10:15