When Paul Kupperberg posted at Bookgasm on the topic of authors who have transformed themselves from comic book scriptwriters to novelists, it was seen as a fairly modern phenomenon. "Books with no pictures in them? What would comic book writers know about those? More than you mi 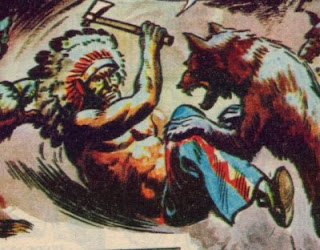 ght think, at least in the last quarter century or so," Paul said.

For the Black Horse Extra ezine, Keith Chapman did a quick roundup of some of the Black Horse Western authors who had also worked for comics. He revealed that a few, like himself, were writing westerns and/or for comics as far back as back as the early1960s!

Australian-based BHW writer Paul Wheelahan (aka Dempsey Clay and Ryan Bodie) is in a class of his own: he had an earlier career as a comic book artist, drawing The Panther.

The Archive is presenting as part of its BHW Weekend a four-page, complete western yarn that Keith wrote as a comic script way back in the 1960s. Blackbow the Cheyenne and the Innocent Fugitive was published in 1966 in Eagle Annual 1967. (Puzzled? Keep reading!)

Eagle was one of the more famous of the British boys' papers that used to appear weekly with comic strips running as serials. Often these were about heroes that were the property of the publishing house. For Eagle, the heroes included Dan Dare, the Iron Man ... and Blackbow.

Once a year, British publishers would put out for the Christmas gift market handsome hardcover books. These "annuals" would carry the next year's date, the title of the comic and complete stories and strips, many featuring the comic's favourite characters. For instance, in Eagle Annual 1967, Keith also had another strip, The Iron Man and the Wrecker Worms, and a standalone short story, Killer Pack.

This writing was all done around thirty years before the first Chap O'Keefe Black Horse Western novels appeared, but a few years after Keith had begun a professional career as a writer and editor in his late teens. Eagle Annual was printed at this time in Holland and the material was prepared well in advance. Keith says the scripts for the 1967 edition were probably written and forwarded to the artists, many also overseas, in the latter part of 1965 or early 1966.

He also says, "The old British comics were a unique fiction market, regrettably now vanished, leaving a void. But I believe any attempt to cater for their lost audience of youngsters by watering down text novels written for adults would be a mistake."

The background story of Blackbow the Cheyenne, a character originally created by an Amalgamated Press comics editor, Edward Holmes, can be found at http://www.internationalhero.co.uk/b/blackbow.htm

Without more ado, we offer for BHW fans and others a nostalgic ride into yesteryear. . . .

The complete strip is presented in four parts - simply click on each image for a large readable version.