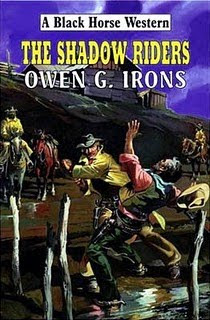 THE SHADOW RIDERS
As by Owen G. Irons
A Black Horse Western from Hale
February 2009
It wasn’t asking too much of a man. The Arizona Rangers only wanted Tyrone Cannfield to let himself be thrown into an army punishment camp sentenced to hard labour, escape from the chain gang, track down the Shadow Riders, a gang of plundering, murderous thugs, bring in Mingo, the savage leader of the badmen, and halt a train robbery. All this to be done on his own with fifty badmen ready to shoot him down at the first misstep.

It wasn’t asking too much of him because Mingo was the man who murdered Cannfield’s wife back in Texas, and he would do everything possible to eliminate him and the Shadow Riders. But would he survive?

The first thing you notice about this book is it’s a much longer read than the majority of Black Horse Westerns, not in page length but by the size of the print and the much narrower margins.

Owen G. Irons (who I believe is really Paul Lederer) starts the book with the savage treatment of the army punishment camp and once Canfield is sprung from there and taken to be a member of the Shadow Riders the many questions begin to build up, which give Canfield many mysteries to ponder and many challenges to overcome: such as who is the mystery sniper, who is the Man with no Name, who is his contact Bert, what are the two sisters roles in all this, and how will he get out alive? MORE
at January 30, 2010