Most western movies have a scene or two set in the saloon - a place for refreshment and entertainment. Some are plush establishments with a stage area for dancing girls, card tables and a restaurant area. Others are much more basic, little more than a wooden bar and a spittoon.

Usually in the movies the saloon sells whiskey and if the thirsty cowpoke is lucky they may offer up a basic meal of beans and stale bread. But in reality it was far different and although there were saloons where the bar was nothing more than a wooden plank nailed to some beer kegs, there were many luxurious establishments where whiskey was only one of the options offered. Quite often saloons also offered free meals with their drinks but this usually consisted of pigs feet and Cheese or a plate of beans.

In 1881 the most popular drink served across American saloons was eggnog. Indeed Harry Johnson's Bartenders manual (1882) list the recipes for many exotic drinks that would have been offered across the West - Sherry Monahan, Claret Sangaree, Tom and Jerry, Applejack are among some of the mixtures detailed in the book. 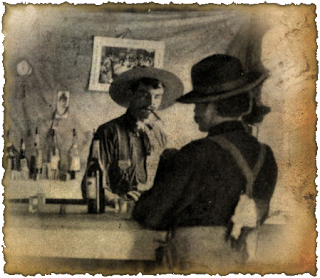 One little detail common to most saloons, which I don't recall ever seeing in a western movie, were the moustache rags which would be dotted around the bar area. These were small pieces or rags which patrons would use to wipe the foam from their moustaches after partaking in a particularly lively beer. These were, in fact, common place until the 1918 flu epidemic when they were considered unsanitary. The same thing happened with spittoons which also went out of vogue after the flu virus spread like wildfire across the country.
at January 30, 2010

I just made the Sangaree one. The result was not unlike port, but so sweet it almost burns. I'll be sure to wipe my moustache...