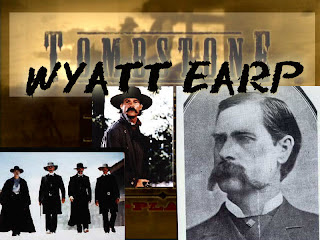 "I am not ashamed of anything I ever did."

IF Billy The Kid was the West's most famous outlaw then Wyatt Earp was the most famous lawman.


The infamous Gunfight at the OK is the first thing people think of when they hear the name of Earp. But that incident, which lasted only seconds, was only one small part of a very big story.

Earp was born in 1848 and died in 1929. His legend lives on and I've tried to detail here a brief outline of his life. 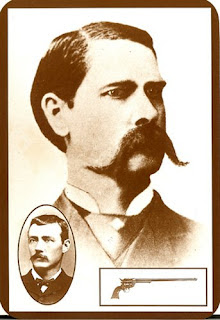 1870-1871 - Earp was a constable in Lamar, Mo. His father Nicholas Porter Earp was the justice of the peace.

1873-Records show that Earp was a policeman inEllsworth. He was involved in the arrest of Ben Thompson during this period.

1876 - 1879-Earp is now a lawman in Dodge City. His name becomes well known for the first time when he is mentioned in the National Police Gazette.

1880 - Earp takes on the role of Deputy Sheriff in Pima County. He moves to Tombston with a repitation as a rough but tough man and he soon gets a badge.

1903-1929 - Earp is now based in Los Angeles where he will spend the rest of his life operating his Happy Day Copper Mine near Vidal, California. He is also involved as a consultant for the then new motion picture industry. However due to a series of bad deals Earp and his wife, Josephine live out the last few years on their lives in poverty.

Earp hated his fame and commented to his biographer - "Notoriety has been the bane of my life. I detest it."

But Earp always attracted the press. Here follows some of the newspaper articles, dugup by internet research, he inspired: