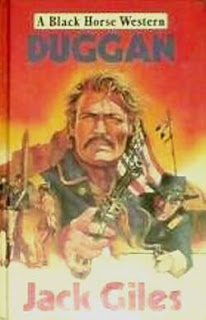 Duggan, I believe, was the fifth Black Horse Western from the pen of Jack Giles (aka Ray Foster), and first published 22 years ago. But this was the first Jack Giles book I could get my hands on, and I just finished reading it, so to me it’s fresh and new.

Duggan has a dramatic character arc. He begins the story as a drunk, a wretch sunk so low he doesn’t even merit a name. He drinks himself to oblivion each day and sleeps it off under a boardwalk. But by the end of the book he’s wearing a captain’s uniform, commanding cavalrymen and saving the bacon of a whole town. If not for Duggan, it’s likely the entire Apache nation would have banded together under one leader and scoured the West of interlopers.

Duggan, you see, is one tough character, making Duggan a tough book to put down. Jack/Ray has orchestrated things so that each time we see Duggan he grows a little more - until finally becoming the man he once was - plus a little extra. This makes for a compelling and satisfying tale. MORE
at January 29, 2010

Jeez, Gary, I'm just crawling out of bed here in the Wild West, and you've already done 15 posts. You're going to have a bookful of material by the time you're done. Hale should give serious thought to publishing it.

But without the reviews from yourself and Steve, we'd never make the 100. Thanks pard