We've got 61 of the 100 posts out of the way in this Black Horse Western Weekend - we're gonna' hit our target, no problem. So at this point I'm going to go all self promotion and plug my own Arkansas Smith which will be published March 31st from Black Horse Westerns.

You can pre-order the book now from Hale, Amazon, Book Depository (with free worldwide shipping), Tesco Online Books, W.H. Smiths and other book sellers. Or request your local library stock the title. If you pre-order now you will ensure your copy and no money will be taken from your account until the book is ready to ship.

Go on, folks - treat yourself to some western adventure. 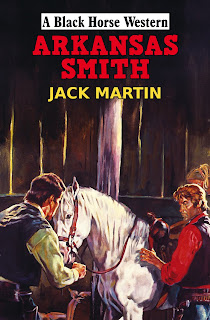 Arkansas Smith: the name was legend. Once he had been a Texas Ranger, but now he was something else entirely. Some said he was an outlaw, a killer of men and a fast draw. Others claimed he was a kind of special lawman, dispensing frontier justice across the West and bringing law to the lawless. Arkansas Smith arrives in Red Rock looking for those who shot and left his friend for dead. He vows to leave no stone unturned in his quest to bring the gunmen to justice and, soon, those who go against him must face the legendary fast draw that helped tame the West.

THE TARNISHED STAR, the debut novel by Gary Dobbs of The Tainted Archive (writing as Jack Martin), is out now, and I'm happy to report that it's a fine traditional Western novel. It's the story of Sheriff Cole Masters, who runs afoul of the evil Bowdens, father and son. Wisely starting in the middle of the action, Dobbs takes a page from the movie RIO BRAVO and has Masters waiting for the arrival of the circuit judge so that the prisoner in his jail, Sam Bowden, can be tried for the murder of a prostitute. Sam's father, wealthy and powerful cattleman Clem Bowden, has a dif 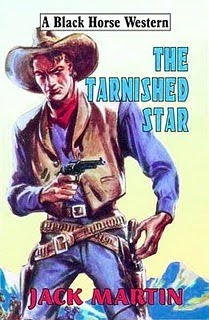 ferent idea. He plans to free his son, no matter what it takes.

From that point, Dobbs veers off from the expected and spins a yarn of violence and redemption in gritty, tough-minded prose. Cole Masters is hardly an infallible hero. He can be indecisive at times and dangerously impulsive at others. He never loses his devotion to the law, however, and before the book is over, the title reference to a tarnished star takes on more than one meaning.

THE TARNISHED STAR is an entertaining, fast-moving story, as are all the books I've read from the Black Horse Westerns line. From the pulpish cover to the final showdown in which plenty of bullets fly, it's a fine, action-packed Western that still manages to be character-driven. JAMES REASONER
at January 30, 2010