Have completed the first draft of a western novel that started out with the title Arkansas Smith: Indian Fighter but is now called Blood On Red Rock. The title could change again in the rewrite since my last novel, The Tarnished Star went through several different titles before settling on the final one.


Hopefully this will be my second published Jack Martin novel.


My first draft's are very rough, since I just write the damn thing, powering through to the end and not worrying about anything other than the narrative structure. So when I come to re-write I usually have a lot of work still to do. But I think if I rewrote as I went along I would soon get bored, lose the natural pace of the tale and lose my confidence in the project.


This book uses the Indian wars as a backdrop and for research I've been reading Dee Brown's excellent Bury My heart at wounded knee. Obviously it's important to get as much factual information as possible in order to allow the story to breathe. Though one of the major plot elements demands some artistic licence but I hope for the large part to remain faithful to the actual times and attitudes. 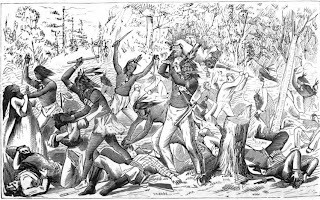 There's the rub - Should I use racist attitudes that would have been prevalent at the time? Or should I substitute words and phrases with more modern, less offensive variations? I suppose the answer is to be true to the era but in these overly PC times I worry that the subject matter would not be suitable for the modern publishing industry.


Ahh well, have to see what happens.

I'm going to ignore it for a fortnight now and take a break - recharge before going back to it and getting it in a state that is fit to send to my publisher. I feel it's better to take a break between drafts in order to distance the author from the work and enable returning to it with a fresh mind. I've lived with Mr Arkansas Smith in my mind for the past month or so and to tell you the truth, I've grown rather fond of him.

After my break I'll be back to put him through the mangle again but hopefully we'll both emerge from the other side smiling...