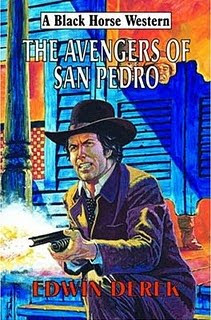 THE AVENGERS OF SAN PEDRO
by Edwin Derek
A Black Horse Western from Hale, December 2008
Renegades raid San Pedro, a small Mexican settlement near one of the largest ranches in Texas, massacring most of its inhabitants. Seeking to avenge the massacre, Brad Miller pursues the renegades across the Texas border into New Mexico. But a dreadful storm forces him to seek shelter in a small isolated ranch owned by Jane Latham.
Brad soon discovers she is caught in the middle of a feud between the Bar Zero ranch and the Blackwash Silver Mine. By helping Jane, Brad is caught up in the feud, but finds the renegades are also involved.
As a range war breaks out, Brad is forced to enlist the aid of a deadly gunman also pursuing the renegades. Together, they must bring justice to New Mexico, where the only law is the six-gun.
After only a few pages the author hooks the reader with many questions, and it isn’t long before he’s hinting at hidden pasts of many of his leading characters that may have some effect on the outcome of this fast moving story. MORE
at January 29, 2010