As well as non-fiction they publish biographies, reference works and they are particularly strong with fiction - general fiction, romance, crime and westerns. 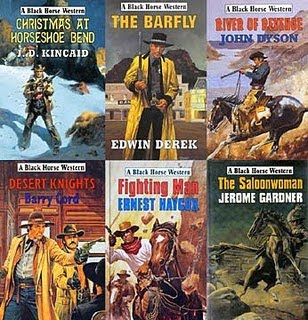 They specialise in small print runs; historically the bulk of their titles have gone to libraries. However this is starting to change with more and more readers buying the books from online booksellers or from Hale direct. And new technologies in publishing mean that they now have the facilities to reprint quickly should there be particular demand for any titles.

These days John Hale runs the company and it is his instinct for a good story that has kept the western line alive when the oaters have long been out of vogue with most readers. Mr. Hale was kind enough to take a break from his busy schedule to answer a few questions with The Tainted Archive.

TA: The internet has allowed writers to push their work like never before - websites, blogs etc have all raised the public awareness of the line. Has this resulted in any concrete sales as of yet?


JH: Sadly not as yet. This is primarily because hardcover westerns tend to be borrowed from libraries, not bought.


TA: The BHW range is unique in the UK in that no other publisher is supporting the genre and Hale deserve kudos for this. Do you feel that the western is a viable genre for the future?


JH: Yes. Providing that all concerned are not solely concerned with financial considerations.


TA: What advice would you give new writers wanting to break into the market?


TA: Small print runs are the norm but if, for instance, there was a massive demand for certain titles would this demand be met?


JH: Most certainly. We can now very quickly print as few as 100 copies if the demand exists.


TA: Recently the Tainted Archive reported that the number of BHW's has increased from six to seven a month. What was the reasoning for this given the current economic downturn?


JH: Enough acceptable westerns are being written. The number per month can go up and down dependent on various factors at the time. 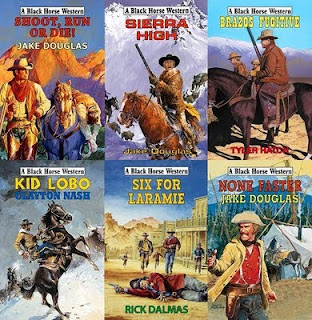 
JH: I can't remember the last time I had time for "non-business" reading.


TA: Do you ever see the genre returning to it's former glory?


JH: Probably only if someone like Louis L'amour emerges and mass market paperback publishers take up the genre.


TA: Finally the community of BHW writers have thir own forums, blogs and websites. Does anyone from Hale look at these.


Thank you Mr Hale for your time in answering these questions.
at January 29, 2010