It took me awhile to get hold of this book - firstly I ordered it from my local library and ended up with Where Legends Ride, a Black Horse western from 2001 written by Paul Wheelahan - wrong book but still I enjoyed it all the same, before returning it to the library. Eventually I got the correct book by ordering from Amazon. Say what you like about the on-line retailer but they sure are quick and efficient and if they have created a virtual monopoly it's the result of a bloody good service.


The book is an anthology of western stories, written largely by writers published by the British Black Horse Range. The book came about, I believe, through the Black Horse Western Forum which incidentally is one of the busiest western forums on the web and open to anyone to join.

Where Legends Ride features 14 very different stories all set in the Old West. 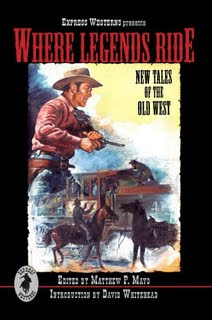 Edited by Mathew P Mayo and with an introduction by David Whitehead, the book wastes no time in getting the reader hooked with its first story, The Prodigal by Chuck Tyrell, a great story in which a marshall has to hunt down his own son. Some of the stories are grim, some are humorous (Hard Times for the Pecos Kid is hilarious) but all are well written authentic feeling tales of The Old West. I especially enjoyed Desert Surrender written by Kit Churchill AKA Andrea Hughes - Andrea, although not a Black Horse Western author, is especially active in the forum and I'm sure will actually sit down and write that long promised novel one day. From this story alone it is evident that she has the talent and feel for the era.

Each and every story is a delight, Lance Howard's Ballad of Jessie Barnett especially pushes the envelope of what western fiction can do. There's not a bad one among them and the list of writers is impressive, each name a legend in the western fiction scene.

THE LEGENDS ARE: Roy Carlton, Derek Rutherford, I. J. Parnham, Chuck Tyrell, Gillian F. Taylor, Jack Giles, Duane Spurlock, Lance Howard, Ross Morton, Ben Bridges, Lee Pierce, Mathew P. Mayo, P. McCormac and Kit Churchill. The book was produced using POD technology and there is a second volume in the works and anyone wanting a good introduction to several of the writers working under the Black Horse imprint as well as some interesting newcomers will love this book. It can be bought HERE and HERE.

As previously mentioned there is a second volume of the anthology , A Fistful of legends published today.
at January 30, 2010