THE TARNISHED STAR BY JACK MARTIN reviewed by Nik Morton

Western book review - The Tarnished Star Original review HERE
THE TARNISHED STAR by Jack Martin has become quite a phenomenon, even before it was published. Pre-sales thanks to astute exposure on the Internet have meant it has gone into reprint before its publication date of June 30. That’s a lot to live up to. Fortunately, the omens are good. It’s a traditional moral tale of the Old West and it begins with a bang. 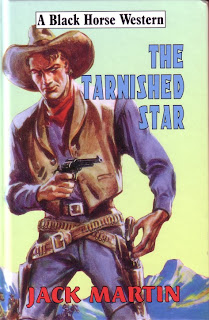 Sheriff Cole Masters is enjoying a smoke of his pipe – it may be his last. I liked that – the threat in the first paragraph hooks the reader. Cole has jailed young Sam Bowden for the murder of a prostitute. Up till now, Bowden’s been bailed out by his father, Clem, who all but owns the town. But murder is different. Cole is waiting for the judge to arrive in a few days’ time. He’s also waiting for Clem Bowden to confront him and break out his son. And besides Em, an old timer, and his schoolteacher fiancé Jessie, Cole has nobody to stand with him. Outnumbered and concerned for Jessie’s safety, Cole lets Sam go and takes a beating and loses his badge. Humiliated, he crawls away to lick his wounds.

But Cole believes in the law – not a rich rancher’s version of it, either. Cole will be back.

The spoilt brat (thirty-years’ old!) Sam is well drawn and totally unlikeable, even by his men and father. But blood’s thicker than common sense in the Bowden scheme of things, so Sam must be saved from himself. To do this, Clem hires two gunslingers, Quill and Boyd, to track down Cole.

Jessie is a strong self-willed character too, especially when she stands up to old man Bowden. There are a number of dramatic scenes where the characters leap off the page, demanding sympathy and understanding. Plenty of action, a fast pace and a hero in the mould of James Stewart. All in all, this is a good debut novel and worthy of inclusion in the BHW stable.
at January 30, 2010